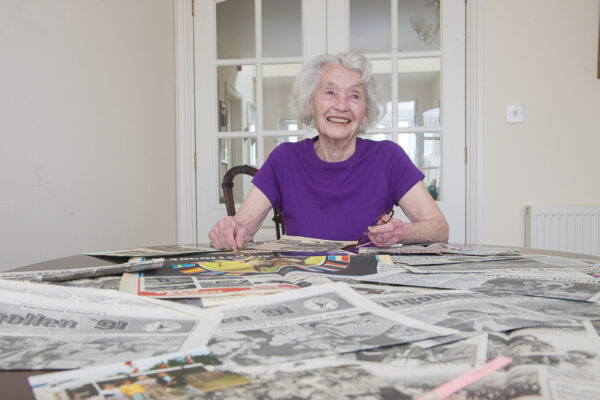 A music loving 92-year-old great-grandmother is spearheading an appeal to find veterans of the first ever Llangollen International Musical Eisteddfod in 1947.
Retired teacher Moira Humphreys was a member of the Coedpoeth Youth Choir who took to the stage at the inaugural festival which was established to promote peace in the aftermath of the Second World War.
Organisers are planning to present Moira and surviving fellow competitors from the historic first eisteddfod with commemorative medals to mark the 75th anniversary of the event.
The popular festival which helped launch the careers of opera superstars Luciano Pavarotti and Sir Bryn Terfel had to be cancelled in 2020 for the only time since its inauguration due to the impact of the Coronavirus pandemic.
In 2021 it took on a virtual format with performances streamed online but this year the music and dance extravaganza is back in the town where “Wales welcomes the world”.
Preparations are well underway for this year’s festival which starts on Thursday, July 7, and culminates with Llanfest on Sunday, July 10, when the eisteddfod are joining forces with the Llangollen Fringe Festival.
During the four-day event there will be a host of new attractions and activities on the revamped outdoor site, including music, dance, talks, comedy, food, drink, shopping, workshops and pop-up entertainment.
In the evenings there will be concerts featuring the singing duo of Aled Jones and Russell Watson and Anoushka Shankar, the British-Indian-American sitar player, producer, film composer and activist who is a half-sister to singer Norah Jones.
The competitions come to a crescendo on the Saturday night with Choir of the World and the contest for the Pendine International Voice of the Future featuring the finest young singers from around the world.
News that the eisteddfod is returning in a physical form this year was music to the ears of Moira Humphreys, from Coedpoeth, near Wrexham, who has vivid memories of the very first one.
She was just a teenager then but over the following seven decades she continued to attend and joined the eisteddfod’s army of volunteers, working with the hospitality team to find accommodation locally for overseas competitors, and more recently she helped greet visitors at the reception area.
According to Moira, she has some “amazing’ memories of good times” at the eisteddfod and has seen many changes since that first occasion when she sang with the Coedpoeth Youth Choir, which was placed third in the choral competition.
Moira who has two grown up daughters, Helen and Mari, several grandchildren and a great grandchild, said: “It would be nice to know there are veterans like me still out there. It is a such gracious idea to recognise them in this anniversary year.”
She is proud to have known the early instigators of the festival including the chairman of Coedpoeth Youth Choir, Harold Tudor, who came up with the idea to hold an international eisteddfod.
“The first festival,” she said, “was held in 1947 but in the couple of years leading up to that there was a lot of hard work put in, fund-raising locally and logistical planning, all of which helped to make it the success it has become today.”
Performers from seven overseas countries braved the journey to Llangollen for the inaugural festival, with about 27 choirs from Wales, England, and Scotland. Decades later more than 400,000 competitors from 140 nations have performed on the world famous stage, while icons of classical and popular music have headlined the varied concert programme. They include Placido Domingo, Kiri Te Kanawa, Jehudi Menuhin, Margot Fonteyn, Elaine Paige and Michael Ball – not to mention Sir Bryn Terfel and Luciano Pavarotti who both competed on the famous pavilion stage as young singers.
Moira has a large collection of memorabilia including past programmes and newspaper cuttings which she often looks at to refresh her memory of past eisteddfods.
She was overjoyed to have seen the late opera icon Pavarotti walking round the eisteddfod field as if it was a home from home when he returned as a superstar in 1995.
Camilla King, the eisteddfod’s executive producer, said : We are hugely grateful to Moira for helping in our bid to track down people who competed at the very first festival in 1947.
“Clearly, their numbers will have dwindled over the years but, as we are celebrating such a momentous milestone, we would like to celebrate the important part they played in creating history and generating new hope at a time when the world was still reeling.
“We feel it is important to honour these peace pioneers who helped lay the foundations for this international treasure.
“One thing that has been steadfast is the ethos of harmony and friendship which was at the heart of the very first eisteddfod, with the aim of promoting peace and healing the wounds of World War II.
“Our philosophy is as important now as ever given the invasion of Ukraine and other troubling issues affecting the world today.
“That’s why we are thrilled to be able to welcome international competitors back to Llangollen so we can bring people together in a spirit of friendship and harmony in every sense of the word.”
If you know of anybody who competed at the first Llangollen International Musical Eisteddfod in 1947 please contact Ceidiog Hughes by emailing ceidiog@ceidiog.com or ringing 07958 497592.