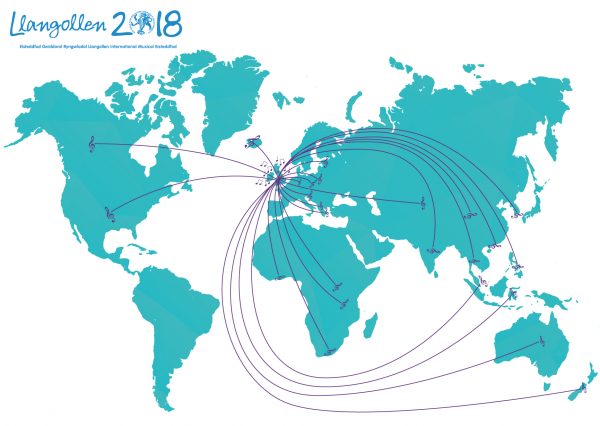 Thousands of performers from 28 countries across six continents will bring the hills of the Dee Valley alive with international music and dance this summer, as they descend on the Llangollen International Musical Eisteddfod in July.

Following an intense selection process, the International Eisteddfod’s team has curated a final line up of 84 vibrant, varied and talented international acts from hundreds of applicants who have been invited to perform in competitions at this year’s festival or appear in non-competitive showcases.

With tickets for the 2018 festival (3rd – 8th July 2018) selling fast, the Llangollen International Musical Eisteddfod has revealed 16 of the exciting groups that are set to perform on the iconic Royal International Pavilion stage this summer.

Vicky Yannoula, Music Director at the Llangollen International Musical Eisteddfod said: “It truly was a momentous task. The calibre of applicants was extremely high and the international prestige of performing at the International Eisteddfod meant that we were, as ever, inundated with applications from dance and choral groups of an exceptional standard.

“Visitors to this year’s festival will be treated to everything from traditional Indian and Greek dancing, to vocal performances from six different continents.”

15 Groups to watch out for at this year’s Llangollen International Musical Eisteddfod:

Originally a traditional church choir, Kor Reyðarfjörður (KorRey for short) from East Iceland has expanded into a community choir of 21 singers, aged from 24 to 70. The choir has also performed with the Manchester Community Choir, who encouraged them to apply to perform at the International Eisteddfod this year.

Returning to the International Eisteddfod for a third non-competitive visit, the 110-strong Manchester Community Choir – who have been performing together for almost 20 years – will treat festival visitors to a range of a cappella world music. They even hope to enjoy a joint performance with their friends in Icelandic Choir, KorRey.

A formidable choir from Stellenbosch in South Africa, this university ensemble comprises 115 singers aged between 18 and 24. Established in 1936, the choir is the oldest in South Africa and will be performing a cappella, but with an African flavour.

The first ever Indian choral group set to come to the International Eisteddfod, Aroha Junior Choir are from Shillong, North East India and have been performing together for two years. An eclectic singing group, they offer something for everyone, performing Gospel music, R ‘n’ B, Classical and Folk music.

Based a short distance from Llangollen, the Fron Male Voice Choir was formed in 1947 specifically to compete at the very first International Eisteddfod. The choir’s 72 choristers come from all walks of life and include policemen, undertakers, teachers, cooks, bankers, accountants, bakers, construction workers and retirees. Two of the Fron’s founding members are also still singing in the choir today.

The Reine Mannersache Zellhausen is made up of 30 active singers aged between 19 and 84 years old and was formed from two choirs that were rivals for more than one hundred years. Formed in 2014 the choir has 15 singers from each choir and performs mainly a cappella pieces spanning epoch and genre.

Appearing at the Llangollen Eisteddfod for the first time this summer, the choir features 40 singers aged 13 to 18 who perform in a wide range of languages and also champion Canadian music. Epitomising the diversity and multiculturalism that the International Eisteddfod is famous for, the families of the BC Girls’ Choir came to Canada from all over the world within one or two generations, representing 30 countries from Brazil to Bosnia, Croatia to Kenya, Sweden to South Africa and China to Costa Rica. There are even families hailing from England, Ireland, Scotland and Wales. Within the group.

A Greek Folk dance group from Canada, Kyklos is committed to preserving and promoting the Hellenic performing arts and has been active since 1983. The group presents authentic dances from throughout Greece and Cyprus, often singing with live music to accompany its performances.

A Barbershop singing group from Sheffield, Hallmark of Harmony is celebrating its 40th anniversary and fourth visit to the International Eisteddfod. Its 70 members range in age from 18 to 80 years old.

A high school choir from Slovenia, a quarter of the Gimnazija Kranj Girls’ Choir changes each year, with most singers spending four years with the choir. The best singers then go on to join the renowned female chamber choir, Carmen Manet, which was named Eurovision Choir of the Year in 2017.

Formed as an extra-curricular school activity, Mother Touch Dance Group have delighted International Eisteddfod visitors with previous appearances. The group has members aged between six and 16 years old and they perform captivating traditional songs and dances and play the African marimba.

Performing classical style and American folk, as well as spiritual and gospel style pieces, this is the choir’s first visit to the International Eisteddfod.  Their last European tour began in New York City at Carnegie Hall debut and travelled to Spain where we performed at the Abbey of Monserrat and La Sagrada Familia. The choir’s Artistic Director, Danya Tiller, also sings professionally with the Grammy-Award winning Phoenix Chorale.

Comprising 16 pupils aged 16 to 18 from Tring in Hertfordshire, the group performs a capella with a contemporary classical repertoire. None of the choristers specialise in classical singing, instead they come from an acting, commercial music or musical theatre background. The choir also boasts some extremely diverse hobbies outside of singing, including a ju-jitsu fighter, a scuba diver, two saxophonists, a ukulele player and one gymnast.

A mixed troupe of children and adults, the Sapat Dance Group have been performing traditional dance together for almost 10 years, visiting the International Eisteddfod twice in that time. They seek to represent the unique culture of the Kyrgyz Republic while also learning about the culture and traditions of the different people and helping to unite the world.

Hailing from Dongguan City in China this instrumental group all play the Guzheng – a traditional Chinese plucked string instrument, also known as a Chinese zither, which has a 2,500-year history. The ensemble, which has been established for five years, performs Chinese Folk music.

The Llangollen International Musical Eisteddfod this year runs from Tuesday 3rd July to Sunday 8th July 2018.  As well as a series of evening concerts featuring Alfie Boe, Van Morrison and Kaiser Chiefs, The Hoosiers and Toploader, there will also be live performances from competitors, emerging bands, musicians and street performers from across the globe, as well as activities to entertain the children and food, drink and local craft stalls.