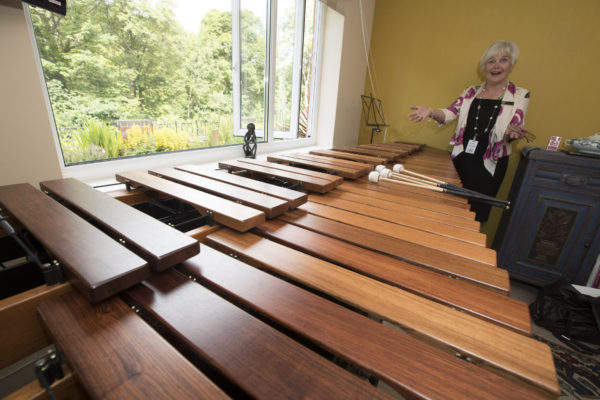 How do you solve a problem like marimba – that’s been one of the headaches for Merle Hunt at this week’s Llangollen International Musical Eisteddfod.

A marimba is a giant, eight-foot long percussion instrument weighing over 350 pounds and finding one and a home for it was the tricky question facing retired schools inspector Merle, Overseas Competitors’ Liaison Officer at the famous festival.

The £10,000 instrument is being played in competition this week by Elise Liu, a diminutive 17-year-old from the Hong Kong Schools Music and Speech Association which sends two competitors to Llangollen every year. 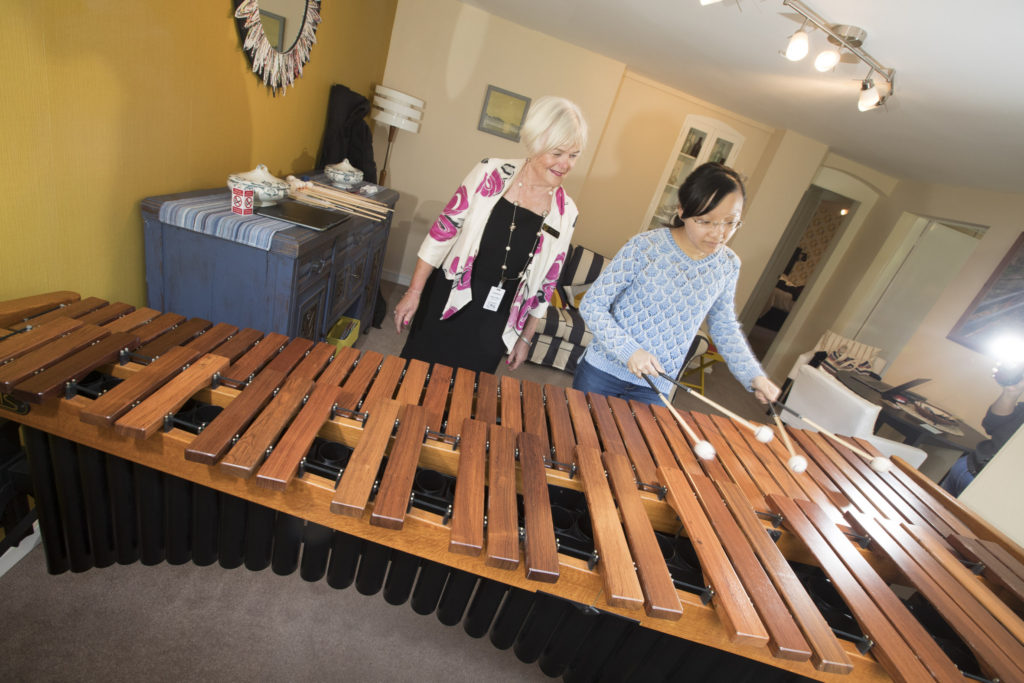 They arrived on the event’s opening day, Tuesday, to find that Merle had located a marimba – a sort of giant xylophone – and somewhere to store it in an apartment rented by Elise’s mum, Jennifer, just across Abbey Road from the Eisteddfod site.

Merle, from Glynceiriog, began competing at the Eisteddfod as a member of her school choir and said: “I didn’t realise that this love affair was going to be a lifelong commitment.

“More than 40 years later I am one of the festival’s army of over 1,000 volunteers – we have just six paid staff – and are putting together this event for the 70th time.”

A grateful Elise said: “We had to come through competition in Hong Kong to be selected to come here.

“I’ve been playing the marimba for ten years and before that I played piano and percussion but I love the marimba for its rich sound and the great variety of music you can play.”

Elise, who is entered for the International Young Musician Competition, added: “Llangollen is a very beautiful town and when I am practising the trains go by and are great entertainment.”

Also with her from Hong Kong is Sabrina Chen, a 16-year-old who plays the traditional Chinese instrument the sheng, a 21-pipe wind instrument, and who is also enjoying the food: “It’s very good, I like fish and chips and lasagne.”

Merle began volunteering at Llangollen when she returned to Wales after working in the Midlands and began hosting members of overseas groups at her home in the Ceiriog Valley and later helped organise accommodation for visitors in local homes.

She now works with a dedicated team to organise airport transfers, accommodation, daily transport and, of course, the budget for over 2,000 foreign visitors.

She said: “Many overseas visitors have overcome immense challenges just to get here. A children’s group of dancers from Zimbabwe took two years to raise the funds to come but they managed it by performing concerts and even selling homemade lemonade.”

She also enjoys the impromptu performances the event inspires and said: “On one occasion Irish dancers and musicians were rehearsing in the Competitors’ Club Tent when an Indian group spontaneously joined in and that often happens.

“One year a dance group from Georgia stayed in my village. We spoke no Russian and they spoke no English, but what fun we had with lots of gesticulations and us dressing in their costumes and trying to emulate their movements while they took pictures and found it all hugely amusing.

“Last year the arrival of a children’s dance group from Nepal was under threat following the devastating earthquake but our audiences pledged money, some adjudicators gave back their fees, Rotary and Lions groups made donations, local businesses provided food and enough was raised not only to pay all their costs but also to donate over £2,000 to the disaster fund itself.

“Eventually, four musicians and two children arrived and welcoming them was a Welsh choir with an emotional rendition of the great hymn ‘Calon Lan’.

“I love being part of the volunteer teams and it never ceases to amaze me how the Eisteddfod jigsaw comes together. The camaraderie and teamwork is second to none.”