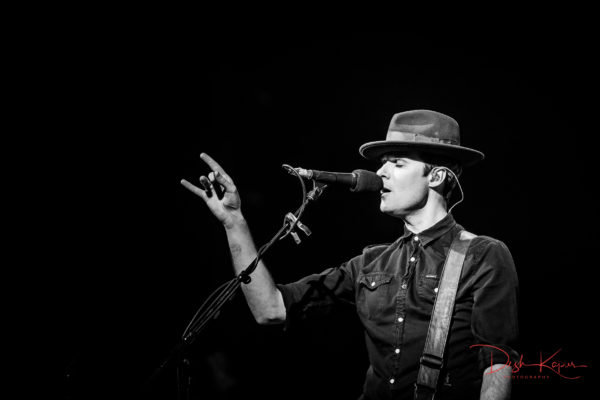 The show was both bands’ first gig of the year in North Wales and one of the first opportunities in 2019 for fans in the region to see them live. Both The Fratellis and The Coral lifted the roof off the Royal Pavilion as they tore through crowd favourites.

The afternoon began on the festival’s outside stages, with performances from a whole spectrum of contemporary bands from across North Wales, Cheshire, Merseyside and Shropshire. The Eisteddfod welcomed the return of The Cavern Club, one of the world’s most famous music club.

The Liverpool-based music venue joined the final celebrations on the Amphitheatre stage to an enthusiastic crowd.  The legendary club has been the beating heart of Liverpool’s iconic music scene for over seven decades and will celebrate The Beatles pop history at the festival – hosting a myriad of music performances by world class singers from Liverpool Tony Skegg.

Nineties pop rock trio Dodgy, kick started the evening performance in the Pavilion with a trip down memory lane, playing iconic hits Staying Out for the Summer, Good Enough and If You’re Thinking of Me.

High-energy Leeds-based indie icons The Pigeon Detectives followed onstage bringing the energy of the crowd to a whole new level with their notorious hits, Take Her Back and I Found Out.

The Coral exploded onto stage with Jacqueline, creating an electrifying environment and the festival revelers leapt to their feet maintaining those energy levels for the whole set.

The Fratellis made an even bigger dramatic entrance, starting their set with Henrietta carrying the audience to a crescendo as they performed their most famous hits, including Whistle for the Choir and the infectious Chelsea Dagger.

Both bands kept the energy electric with the crowd on their feet from start to finish as they rocked the Royal Pavilion with their hit songs.

In the last eight years since Llanfest’s launch it has grown into a full day festival aimed at a younger audience to attract new audiences to Llangollen and festival lovers from across the country.

Henrietta, Baby Don’t You Lie, Starcrossed Losers, Whistle for The Choir, Imposters, For The Girl, I’ve Been Blind, Flathead, Stand Up Tragedy, Everybody Knows You Cried Last Night, Medicine, Baby Fratelli, Too Much Wine, Chelsea Dagger and Runaround Sue

Jacqueline, Pass It On, Bill McCai, In The Morning, Holy Revelation, Sweet Release, Miss Fortune, In The Rain, 1000 Years, Reaching Out, Eyes Like Pearls, Goodbye and Dreaming of You