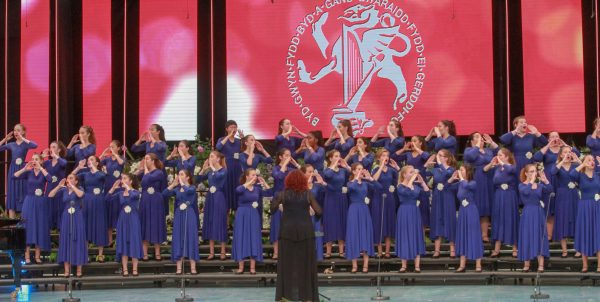 One of the UK’s oldest music festivals, which has been welcoming global choirs for over 70 years, has commissioned two new pieces of music to reflect the growing number of younger singers entering its choral competitions.

Llangollen International Musical Eisteddfod has commissioned two new audition test pieces, one piece by Roderick Willliams OBE titled ‘Delight in Disorder’ and the other by Interim Music Director of the Llangollen Eisteddfod, Dr Edward-Rhys Harry, titled ‘Reset the World’. Both have been specifically commissioned to resonate with the festival’s teenage entrants and the organisers are encouraging choir leaders from across the globe to enter its Senior Children’s Choir competition, before the upcoming deadline of Friday 23rd November.

‘Delight in Disorder’ is a setting of a poem by Robert Herrick and the music tries to capture the mischievous character of the words.

Composer, Roderick Willliams OBE, said: “The piece is designed to be suitable for various combinations of broken and unbroken voices across gender.  The piano part features a walking bass that remains unchanged throughout the piece.  While no doubt testing for the performers, hopefully it will also appeal to their sense of fun.”

He said: “We have welcomed global performers since the end of the Second World War and to stay current we regularly look to modernise our offering to respond to our changing audiences. When writing the piece, I envisaged what it would be like if the world had its own ‘reset button’ similar to technological devices, hence the title of the piece.

“We hope this gospel-inspired song will be a valuable addition to the audition test pieces choirs choose to perform, as we would like to encourage teenagers around the world to ‘press pause’ and enjoy real world harmony, diversity and culture through music and performance. “

Acknowledged as one of the foremost world festivals, the festival has been nominated for a number of awards, including the Nobel Prize for Peace and promotes peace and goodwill between nations through an annual festival of music, folklore and dance.

Groups of no fewer than 16 voices and aged between 12-18 can enter for the chance to win, following in the footsteps of 2018 winners, British Columbia Girls Choir from Canada. Successful entrants will compete on the Royal International Pavilion stage for the prestigious title of Children’s Choir of the World. Famous musicians who have performed on the renowned stage in previous years include Pavarotti, Van Morrison, Alfie Boe and Gregory Porter.

The closing date for the Senior Children’s Choir category is on Friday 23rd November 2018 and applicants are asked to contact the Eisteddfod office to obtain a copy of the test pieces.

For more information on all the competitions or to apply on the Eisteddfod competitors’ website visit: http://eisteddfodcompetitions.co.uk/