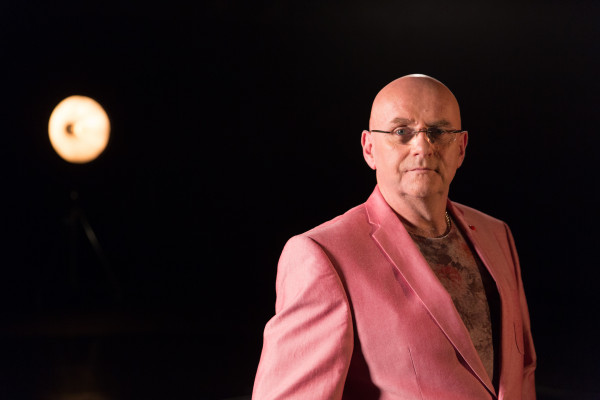 Côr Glanaethwy conductor Cefin Roberts, who came so close to winning this year’s series of Britain’s Got Talent on ITV has spoken of his and the choir’s huge gratitude to the Llangollen International Musical Eisteddfod.

Cefin spoke as he prepared to be one of the presenting teams for S4C’s coverage on Saturday night for the Choir of the World competition.

“We were in the final ourselves last year, and had the honour of competing in the Choir of the World competition. Llangollen was where I learnt the most on my journey to lead a choir due to the unique global sound and different ways of singing,” says Cefin, who will join presenter Nia Roberts from the S4C studio on the maes and organiser of S4C’s prestigious Côr Cymru competition Gwawr Owen.

“The Llangollen International Eisteddfod showcases some of the best talent in the world. We’ve learnt from competing against the best,” he adds.

The Llangollen International Musical Eisteddfod will reach a climax when choirs from around the world come together to compete for the title of Choir of the World 2015. S4C will broadcast the evening of music as it happens on Saturday, 11 July.

The Choir of the World competition is one of the highlights of the International Eisteddfod. Winners of the youth, mixed, male voice, women’s and open categories will face each other in the final with the aim of earning the title of Choir of the World 2015 as well as the Luciano Pavarotti trophy and a cash prize of £3,000.

“This is one of the biggest events when it comes to choral singing competitions in Wales and across Britain. The biggest pleasure I get is hearing such an amazing variety of sounds and repertoire – from the entertaining and challenging to the unexpected. Because they all represent the best in their categories, you really are seeing some of the best there is.

“Every year brings something different and you have to expect the unexpected. But I must admit the youth and mixed choirs are amongst my favourites.
“My advice to the choirs in the competition would be to enjoy the process of getting to the final. Good luck to everyone taking part.”
Llangollen International Eisteddfod’s Musical Director Eilir Owen Griffiths added, “We have international class performers from around the world and that combined with the colour and atmosphere generated by our competitors and the welcome they receive makes this a unique event.”

S4C’s coverage from Llangollen draws to a close on Sunday night, with an evening of South American music including a new work by composer Hector MacDonald to mark 150 years since the first Welsh settlers arrived in Patagonia. The BBC National Orchestra of Wales, harpist Catrin Finch and tenor Wynne Evans will also be performing on stage.