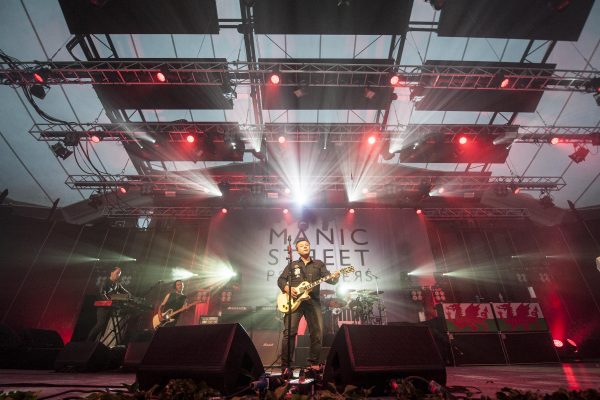 The band’s first ever Llangollen appearance raised the roof of the Royal International Pavilion as they stormed through favourites from throughout their career, including Everything Must Go, If You Tolerate This Your Children Will Be Next, and A Design For Life.

Crowds at Llanfest were treated to a full line-up that included bassist Nicky Wire, who had pulled out of the band’s gig at MadCool festival in Madrid on Saturday [8TH JULY] due to a ‘serious family illness’.

The afternoon kicked off with performances from a range of new, contemporary bands on the outside stages of the Eisteddfod field, followed by an energetic warm up set from Radio 1 DJ, Huw Stephens, which had the pavilion and fields outside bouncing.

The gig was the first time that the International Eisteddfod had removed seating from the rear of the pavilion to increase capacity to accommodate demand for tickets.

Reverend and The Makers’ performed a raft of the band’s hits including Heavyweight Champion of the World and a storming rendition of Out of the Shadows rounding off a set that lead singer, Jon McClure, described as the “Prawn Cocktail” to the Manic’s main course.

And what a main course it was. The atmosphere was electric in an almost-packed to capacity pavilion as the Manics burst onto the stage opening with 1992 hit Motorcycle Emptiness and iconic hit Everything Must Go, which had the audience on its feet and singing along in fine voice.

Working through the band’s impressive catalogue of hits, crowd favourites proved to be You Stole the Sun, Kevin Carter and If You Tolerate This Then Your Children Will Be Next.

Towards the back end of the blistering set, the band slowed the tempo slightly with acoustic versions of This Sullen Welsh Heart and 30 Year War, before ramping the pace back up to a riotous crescendo by way of fan favourite You Love Us, Tsunami and Show Me The Wonder.

The opening chords of the final number was greeted by thundering cheers around the pavilion as the Manics closed what was a truly epic show with anthem Design For Life, a performance supported by the vocals of the thousands of fans that packed the pavilion.

It was a triumphant end to the festival’s 70th anniversary festival, which boasted a world-class line up including Gregory Porter, Only Boys Aloud, Sir Bryn Terfel, The Overtones, Kristine Opolais and Kristian Benedikt in Tosca, Reverend and The Makers and BBC Radio One’s Huw Stephens.

Walk Me To The Bridge

You Stole the Sun

This is The Day

No Surface All Feeling

If You Tolerate This Then Your Children Will Be Next

Show Me The Wonder

For more information on the Llangollen International Musical Eisteddfod and Llanfest, click here.