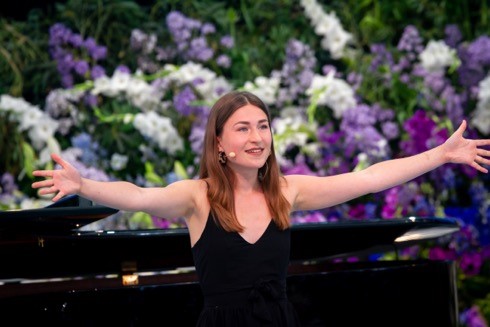 Mared Williams, aged 21, wowed audiences and adjudicators with her performances of “So Big / So Small”,  “Pulled” from The Addams Family and “Being Alive” on the stage of the Royal International Pavilion in the competition’s final on Wednesday 4th July.

Mared fought off tough competition in the preliminary rounds of the competition, which took place in Llangollen Methodist Church on Tuesday 3rd July, landing a place in the final alongside Kade Bailey from Canada and Megan-Hollie Robertson from Wales.

Adjudicators Kate Edgar and Sarah Wigley placed Kade in second for his rendition of “She Loves Me”, while Megan-Hollie came third, with her wonderful performance. 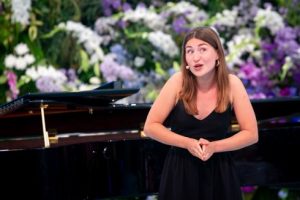 Sarah Wigley said: “Mared provided an absolutely captivating and enthralling performance which showcased her ability to communicate with the audience, her passion for being on stage as well as her national vocal ability and range.”

Winner Mared Williams said: “Having been placed third last year, it’s really exciting to see my progression into first place this year, and I’m really proud to be able to represent Wales at the Eisteddfod”.

Judith Ferber, the Gold Coast Eisteddfod’s General Manager, said: “We would like to congratulate Mared on their fantastic performance at the International Eisteddfod in Llangollen. We look forward to her performing in the Musicale and allowing us to continue our celebration of international musical talent and of our long-standing relationship with the festival.”

Music Director of the Llangollen International Musical Eisteddfod, Vicky Yannoula, added: “Mared gave a stunning performance for the audience and adjudicators during this year’s competition and we would like to congratulate her on being named the International Voice of Musical Theatre 2018.

“Our relationship with the Gold Coast Eisteddfod helps us to further raise the international profile of the Llangollen International Musical Eisteddfod, as well as providing a springboard for exciting musical careers. We would like to thank Judith and the team for their continued support and friendship.”