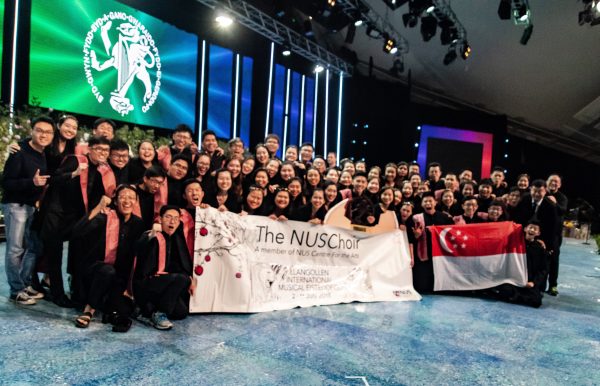 Members of the Al-lzhar High School dance group sprung onto the stage to collect the Lucille Armstrong Trophy in a sea of excitement.

The pavilion then erupted as the National University Singapore Choir was announced as Choir of the World 2018 by the International Eisteddfod music director, Vicky Yannoula.

The singers stormed the stage to collect the Pavarotti Trophy, cheering loudly in a celebration that was joined by audience and competitors alike.

During the awards ceremony, esteemed conductor Andrè van der Merwe was also presented with the Gwobr Jayne Davies Prize for the most outstanding conductor, who each year is chosen from all of the choirs competing the Choir of the World final.

The first half of the concert, sponsored by GHP Legal, saw performances from Stellenbosch University Choir, National University of Singapore Choir, 441 Hz Chamber Choir and Fronycysyllte Male Voice Choir the winners of the Youth, Open, Mixed and Male Choir categories respectively, before special guests Red Priest took to the stage.

The Baroque instrumental group, named after the flame-haired priest Antonio Vivaldi, performed a range of early music on recorders, violin, cello and harpsichord, injected with a gypsy feel.

Renowned for their dynamic, charismatic and visionary performances, the group brought the audience its feet and encouraged it to join in the revelry and paint the International Pavilion red, as the week of intense competitions drew to a close.

After a short interval Mother Touch Dance Group, Al-lzhar High School and Gabru Panjab de in the Dance Champions of the World competition – delighted spectators with thrilling dance performances from across the globe. After the performances, Red Priest returned for another round of upbeat Baroque beats, spiced up with technical wizardry and stunning showmanship.

Following the presentations the concert concluded, as is traditional, with the pavilion joining hands to sing Auld Lang Syne, bringing the Llangollen International Musical Eisteddfod 2018 competitions to a close.

Speaking after the competition, her first as Music Director of the International Eisteddfod, Vicky Yannoula, said:

“What a stunning competition and uplifting evening! The adjudicators really had their work cut out for them in selecting the winners.

“Both the choral and dance competitors were absolutely world class and each and every performance captivated the audience. Seeing the culmination of months and months of preparation unfolding before us was quite simply a joy to behold.

“It was a tough call, but Al-lzhar High School and Mother Touch Dance Group just had the edge over their competitors, displaying emotion, spirit and passion in every note and movement. I’d like to thank them both for their contribution to this year’s festival and congratulate them on their victory.”

Vicky continued: “All of the choral and dance competitors were absolutely world class and seeing the culmination of months and months of preparation unfolding before us was quite simply a joy to behold.

“This prestigious competition attracts globally acclaimed choirs to Llangollen every year, but National University Singapore Choir was truly outstanding tonight. They displayed emotion, spirit and passion in every note. Similarly Al-lzhar High School Pondok Labu completely captivated the Pavilion with every movement. I’d like to thank them both for their contribution to this year’s festival and congratulate them on their victory.”