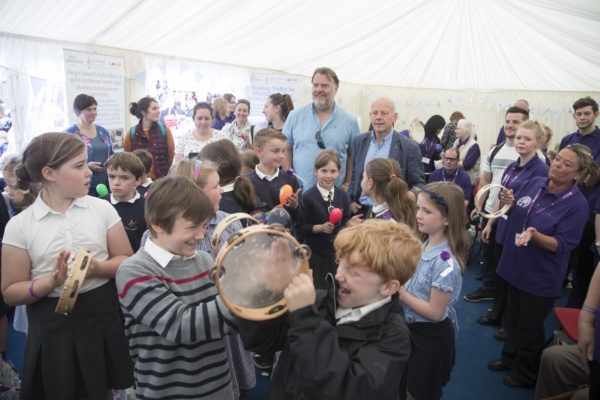 Taking a break from rehearsals for the 70th Gala Classical Concert, Bryn paid a whistle-stop visit to the tent where the award-winning Pendine Park care organisation was hosting a morning of musical workshops as part of the festival’s Children’s Day activities.

Youngsters from a host of visiting schools joined 15 residents from the Pendine Park care home in Wrexham in warm-up movement exercises and a sing-along, clapping and swaying in time to the music and beating out the rhythm using maracas and tambourines.

Leading the sessions were Jenny Pearson, a freelance singer and tutor, and pianist Annette Bryn Parri, who have both worked with the Welsh National Opera.

The workshops were of Pendine’s pioneering enrichment programme, which enhances the experience of residents and also plays a key role in personal training and staff development.

Around 20 Pendine staff were on hand to make sure that the morning ran smoothly.

Midway through one of the sessions Bryn and his girlfriend, former Royal harpist Hannah Stone, slipped quietly into the back of the tent. 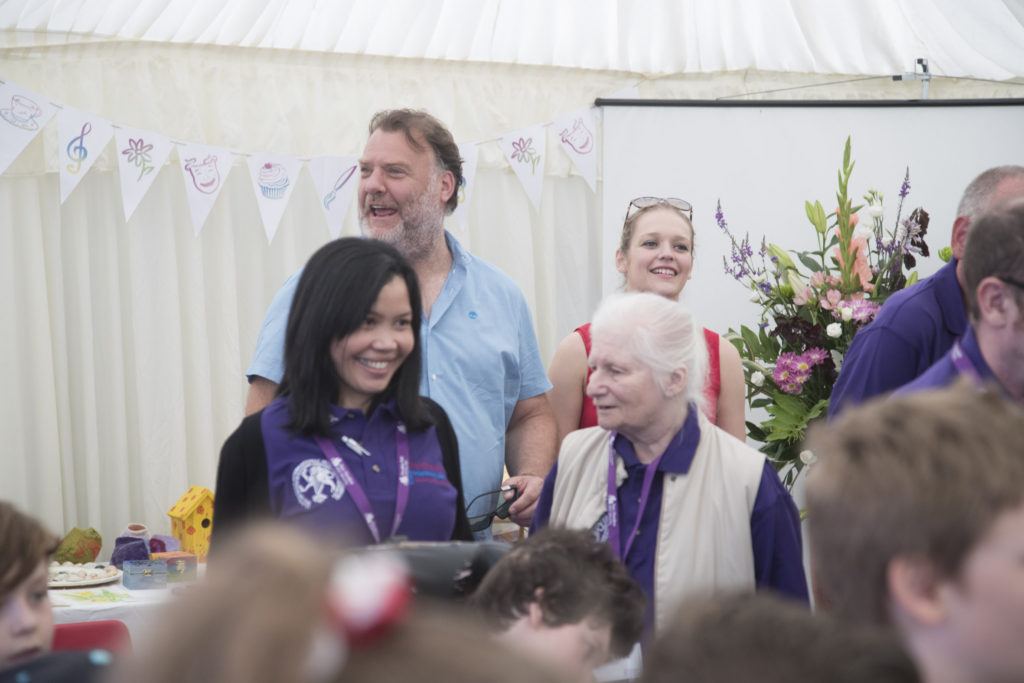 But, along with Pendine proprietor Mario Kreft, Bryn quickly entered into the spirit of things by joining in the exercises and at one stage added his rich bass-baritone to the singing of the Banana Song.

Mario was also thrilled to see pupils from his old school, Ysgol Trefnant in Denbigh, being ushered into the tent to join the session.

Later, Bryn said: “Usually when I come to the Eisteddfod I don’t have much time to see what’s happening around the field but as my concert rehearsal doesn’t start until a little later I thought I’d pop into the tent and see what was going on.

“I’m glad that I did because workshops like this are such an important corner of musical therapy.

“My mother worked at a special school in Caernarfon, so this sort of environment has always been part of my life.”

Among those enjoying the session was one of the Pendine Park residents, 72-year-old Christine Jones, who clapped and sang along enthusiastically with the music.

She said: “I’ve been to these workshops in previous years and I really look forward to them.

“They’re so much fun and I love being here with the children as I have a grandson and a grand-daughter of my own.”

He said: “I love watching the kids having fun and singing along with them.

“I used to live just up the road in Trevor so I came to the Eisteddfod quite often, including the time when Prince Charles and Princess Diana came.”

At the other end of the age range, eight-year-old Megan Grace from Ysgol Trefnant, was also lapping up every minute of it.

Megan, from Denbigh, said: “I’ve been joining in with the singing and the movements and having lots of fun.

“I’ve never been to the Eisteddfod before so I’m looking forward to going around the field to see the other things happening later.”

Visiting from Meadows Primary School in Oswestry was nine-year-old Lewis Jennings who said: “I came here last year and it was really good, so I wanted to come back again.

“It’s great to join in the singing and exercises with the other children and I’m really enjoying it.”

Sarah Edwards, Pendine Park’s artist in residence who helped organise the workshops, said: “There’s always a huge amount of interest both from the schools and the residents who tell me how much they enjoy them.

“There’s a full programme of activities going on in the Pendine tent throughout the week as part of our enrichment programme, including our pop-up health and beauty salon and pop-up pub serving Pendine Punch and mocktails.

“We’ll also have a recital by harpist Nia Davies Williams.

“It’s lovely to see the way the children and older people interact.”

Mario Kreft said: “A key element in what we do at Pendine Park is bringing together older people with dementia and children.

“The workshops are about raising awareness that old age is nothing to be frightened of and understanding how the arts and music can help change people’s lives for the better.

“We love to be involved with the Eisteddfod because of its ethos of peace and understanding and these sessions are an extension of that.”