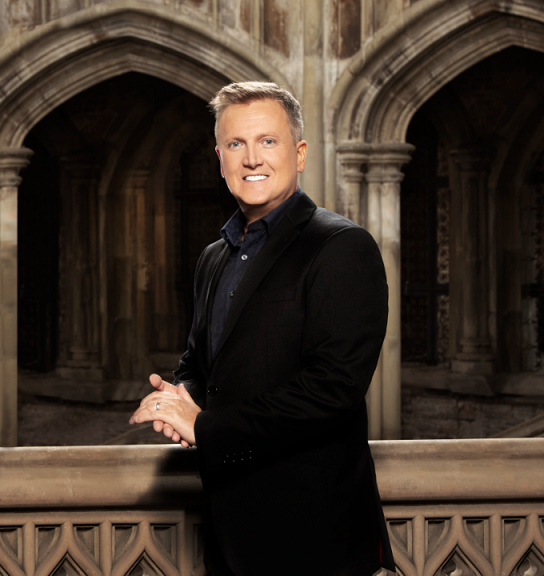 Aled Jones MBE has been a household name since the 1980’s.

He will forever be remembered as one of the world’s most successful boy sopranos.  He made his professional debut as a 12 year old performing the role of the Angel in Handel’s Oratorio ‘Jeptha’ on BBC2 and BBC Radio 3.  The next 4 years were a whirlwind with TV performances galore (he holds the record for most appearances on the Wogan television show).  He was invited to record 3 flagship TV programmes for the BBC from Israel. These programmes were huge hits and the resulting 2 album releases sold over a million copies.  At one point both albums were in the top 5 Official UK Album Charts.  It was only Bruce Springsteen’s album ‘Born in the USA’ that kept him off the top spot! He performed countless concerts as a boy soprano all over the world including a spot at the Hollywood Bowl and sharing the stage with maestro Leonard Bernstein.  Singing the ‘Chichester Psalms’ with the composer conducting was a huge highlight.  Aled had already released 12 albums by the time “Walking in the Air”, the song from the animated film The Snowman, was released. The record reached No. 5 in the UK charts in 1985.  He also performed 10 sell-out live ‘Snowman’ shows that year.

Jones’ recording career was temporarily halted when his voice broke at 16. By this time, he had recorded 16 albums, sold more than six million albums, and sang for Pope John Paul II, the Queen and the Prince and Princess of Wales in a private recital, as well as presenting numerous children’s television programmes.

Between the age of 16 and 18 Aled toured Japan with the Vienna Woods Boy’s Choir.  Aled’s boy voice had gone, so instead he narrated live Humperdinck’s opera ‘Hansel and Gretel’, in Japanese! He was mobbed everywhere he went in the country. During this period 12 albums were released selling in excess of 2 million copies. He went on to study at the Royal Academy of Music and Bristol Old Vic Theatre School before being asked to perform the role of Joseph in Andrew Lloyd Webber’s ‘Joseph and the Amazing Technicolour Dreamcoat’.

Aled was offered presenting roles on BBC Radio Wales (a show he still presents 15 years on) as well as a TV role for the welsh-speaking channel S4C.   He was also approached about a presenting role on the BBC’s  ‘Songs of Praise’. In 2002, Songs of Praise asked Aled to sing on the programme.   This led to the release of his first, real adult album entitled ‘Aled’ that went to No 1 in the Classical Charts. The following year Aled was approached by ‘Classic FM’ radio and offered a two-hour Sunday morning programme which become a hugely popular show.

Aled released another album entitled ‘Higher’, which also topped the classical charts.  He followed this up with an album of carols, which sold in excess of 40,0000 copies.  Aled was also the subject of the last ever ‘This is Your Life’ on the BBC and was surprised on stage at the Royal Albert Hall during the filming of the ‘Songs of Praise’ Big Sing.

In 2004 Aled was a contestant on the second series of ‘Strictly Come Dancing’, to huge popular acclaim. He made it through to the semi-final of the competition and cites dancing a Samba to the Tom Jones hit ‘It’s Not Unusual’ in Blackpool’s famous Tower Ballroom as a real highlight!

In 2008 Aled took on the lead role of Caractacus Potts in ‘Chitty Chitty Bang Bang’ in Cardiff to great acclaim and in 2009 he joined the cast of Irving Berlin’s ‘White Christmas’ in the starring role and played in Plymouth and Manchester.  Aled returned to ‘White Christmas’ to star in London’s West End at the end of 2014. The show was a sell-out.

Aled has written three books entitled ‘Aled’s Forty Favourite Hymns’ which was published towards the end of 2009 as well as a book on his ‘Favourite Christmas Carols’.  His autobiography called ‘My Story’ was re-published in 2013.

Following the success of his 2016 release One Voice, Aled launched the follow up album One Voice At Christmas 2016 with a spectacular press launch 18,000ft in the air where he performed the new Walking In The Air at the world’s highest Christmas concert over the UK. Again this album reached Number 1 in the Classical Chart.