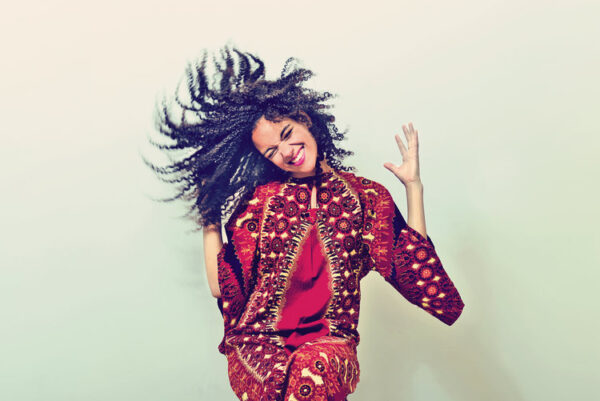 “A star in the making. ” Stereoboard.

“She’s overflowing with a comfortable self-confidence and has every right to be” Big Issue.

A Welsh speaker with Bajan heritage, 23 year old Kizzy Crawford’s solo career began just a few years ago and in that time, Kizzy has developed an increasing sophistication to her songwriting and performance, which is complimented by her soulful voice that boasts both range and charisma.

Over the last few years, Kizzy has performed at many festivals including Cambridge Folk Festival, Cheltenham Jazz, Festival No 6, Womex, Sŵn Festival, Cornbury Hay Festival, How The Light Gets In and she has performed as guest artist with BBC National Orchestra of Wales.

Kizzy has performed live on TV for S4C, Children in Need for BBC 1 and the 6 Nations advert campaign. Kizzy’s music is regularly used in TV & online adverts, her song ‘Caer O Feddyliau’ featured on an ident for S4C and her track ‘Shout Out’ and Welsh language version ‘Yr Alwad’ featured in the 2015 VISIT WALES TV & online ad campaign

Kizzy signed to publishing company BDi Music in 2014 and she was later selected as a BBC Horizons12 Artist which included the opportunity to perform a live session at BBC Maida Vale. Kizzy was also a featured artist with Gwilym Simcock for a BBC Radio 4 music programme and she was invited to perform on The Verbs ‘Young Talent’ programme for BBC Radio 3. Kizzy has played many gigs including shows at the National Assembly for Wales during WOMEX, Glastonbury, London Jazz Festival, Cheltenham Jazz, Hay Festival, Dinefwr Festival, the Plaid Cymru Conference, Blissfields, Wakestock, Celtic Connections, L’Orient, Abergavenny Food Festival (where she performed her single Golden Brown live on BBC Radio 4) and the Prince Edward Island Festival, Canada. Kizzy has played as support artist for Gruff Rhys, Newton Faulkner, Benjamin Francis Leftwich and has performed alongside Cerys Matthews at the House of Commons, Westminster.

In 2016, five of Kizzy’s songs were selected as set works as part of the WJEC 2016 A Level Music syllabus, she sat in the contemporary music section alongside Gruff Rhys, The Manic Street Preachers and the Super Furry Animals. Consequently, Kizzy was invited to chat about this achievement and perform one of the set works for BBC Radio 4’s Woman’s Hour. Later that year, Kizzy co-wrote music with jazz pianist & composer Gwilym Simcock for the collaborative project Birdsong-Can Yr Adar which toured throughout Wales and at London Jazz Festival. Birdsong was based on the Celtic Rainforest of Carngafallt and was a partnership project with Sinfonia Cymru, RSPB Cymru, PRS & Arts Council of Wales. The Birdsong album was released in May 2018 via Basho Records followed by a launch in London and tour of Wales.