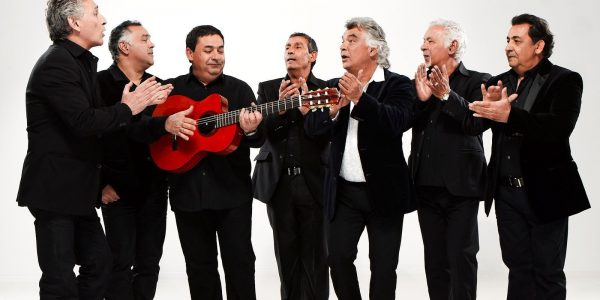 The Gipsy Kings are a salsa, pop and flamenco outfit hailing from the south of France. They first captured the world’s imagination in 1987 with the release of their self-titled album ‘Gipsy Kings’. Though it was their third release, it was the first to reach an international audience – certified gold and platinum in countries around the world and selling millions of copies, the record sparked a fire and built a fanbase that has remained loyal for decades. Since this introduction to the world stage, the Gipsy Kings have continued their momentum, selling close to twenty million albums and touring the world. Playing at festivals, events and venues in all corners of the globe, the band have become a live phenomenon, known for their energetic sets that feature infectious Latin rhythms and virtuoso guitar playing.

Despite being born and raised in France, the group’s lineage can be traced back to gitanos, Spanish Romani people who fled the Catalonia region during the Spanish Civil War. This depth of heritage can be heard in the band’s eclectic sound, which draws from a variety of sounds and traditions and reflects their ancestry. Their music is a heady concoction of rumba, flamenco and salsa, described as “a crossroads where gypsy rhapsody and flamenco meets salsa funk”. As a result, their live shows are perfect for fans of Latin, world and contemporary pop music – and just about anybody who loves to dance. The Gipsy Kings front man is the incredible Andre Reyes. Son of celebrated flamenco artist Jose Reyes, Andre delights audiences with his impressive guitar playing and stunning vocals. Alongside Andre, The Gipsy Kings have played some of the world’s greatest venues, including the Royal Albert Hall and Kenwood House.