Music composed by both the first and current Musical Directors of the iconic cultural festival will be performed at the 70th Llangollen International Musical Eisteddfod next month.

Eilir said: “Bryn Terfel will be singing the song Tosturi Duw as a tribute to my illustrious predecessor while I’ll be giving the world premiere of my own Fanfare which is also a celebration of this very special occasion.”

Music was a lifelong passion for William Sydney Gwynne Williams OBE who was born in Llangollen in 1896 and who was the great festival’s first Musical Director and held the post from 1947 to 1977 – the year before he died.

He had started composing as a teenager, established the Welsh Musicians Society in 1923 and began to be involved in the Welsh Folk Song Society in 1933.

In 1947 he became the Llangollen Eisteddfod’s first Musical Director and remained in the key role for 30 years until his retirement in 1977. He died the following year.

His Llangollen-based Gwynn Publishing firm produced much solo and choral music as well as arrangements of music from many countries, all of great importance to the launching of the International Eisteddfod in 1947.

The Gorsedd Prayer and My Little Welsh Home were among his most popular compositions.

Today’s Musical Director, Eilir Owen Griffiths, said: “W.S Gwynne Williams was once described as a musical ambassador and the most far-reaching influence Wales has ever produced and that is certainly true.

“He was one of the founding fathers of the Llangollen Eisteddfod and that is why we are honouring his memory at the 70th festival.

“Bryn will be singing Tosturi Duw, which in English means God’s Mercy, and is a beautiful song. 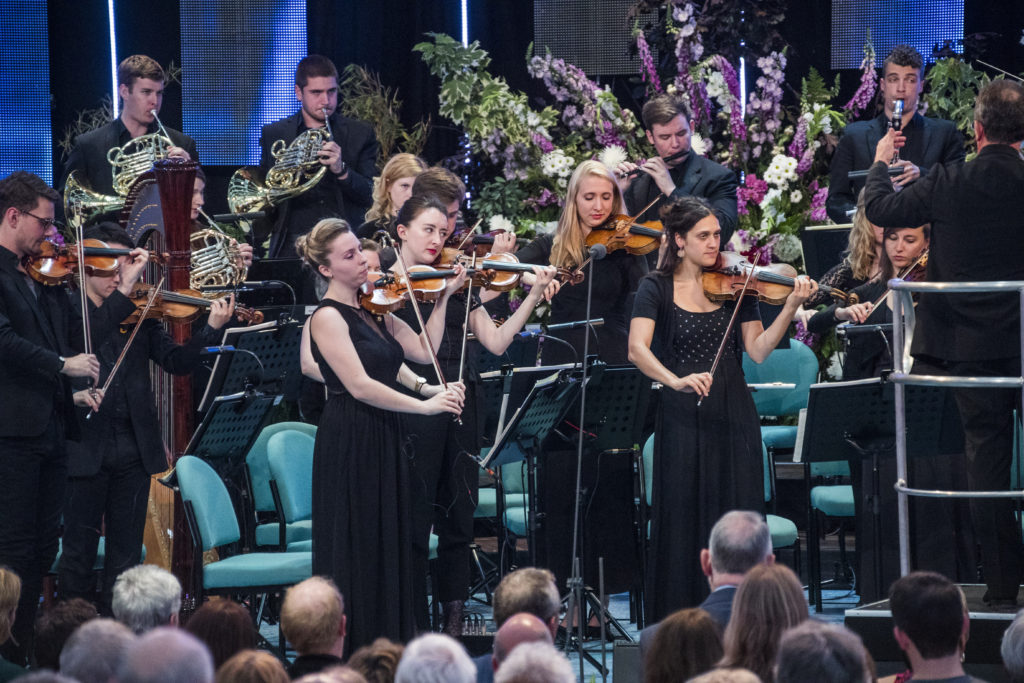 “Our other guest performer at the concert, the Maltese tenor Joseph Calleja, will perform another famous song by W.S Gwynne Williams, Little Welsh Home, which will be another fitting tribute to him.

“The concert will open with the world premiere of a fanfare I have composed especially for the 70th Eisteddfod entitled Fanfare for Peace and this will be its world premiere.

“It’s a brand new piece which will be performed by the full orchestra. It’s in three parts and has a big percussive opening, a very still section in the middle and a big finish.

“I’ve been working on it or some time. I’ve written a few fanfares before but this is the first one I’ve done for a full orchestra and I’m looking forward to hearing it in public for the first time.”

Eilir, who has won several awards for his compositions, including Tlws y Cerddor – the Musician’s Medal – at the National Eisteddfod, recalled that he’s had the pleasure of seeing a number of operatic headliners perform his musical work.

“In 2011 at a concert to mark the creation of the University of Wales Trinity Saint David at Aberglasney Gardens in Carmarthen Bryn Terfel, along with the Welsh tenor Wynne Evans, memorably sang a requiem I had written,” he said.

“Each year since I became Musical Director at Llangollen I’ve tried to write something especially for the festival, either an arrangement or a new composition.

“One year I wrote an arrangement of the Welsh hymn Calon Lân for Noah Stewart and for my first Eisteddfod in 2012 Wynne Evans performed my Ave Verum Corpus at the closing concert.

“This year’s Thursday evening concert has a wonderful programme which will show off all our singers at their best.

“It’s very diverse and includes classical pieces by Wagner, Verdi and Bizet but will also see Bryn singing If I Were a Rich Man from the musical Fiddler on the Roof and our two soloists combining on Anything You Can Do from Annie Get Your Gun.

“The concert is dedicated to the Eisteddfod and to all the volunteers who put so much work into making it a success every year.”

To book tickets and for more details on the 2016 festival go to the website at www.international-eisteddfod.co.uk