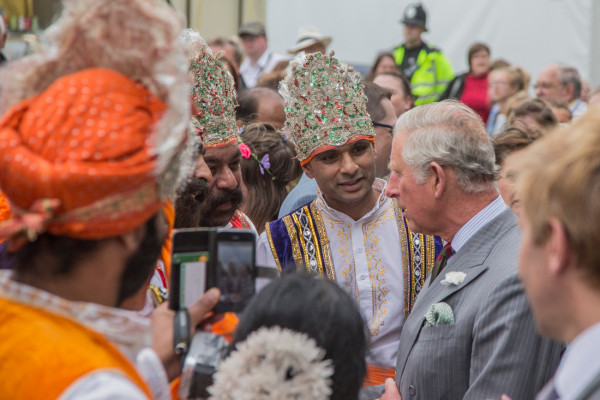 Punjabi dancers who inspired the Prince of Wales to get down to the Bhangra beat have been appointed honorary ambassadors of the iconic festival where it happened.

The Sheerer Punjabi Dancers from Nottingham made global headlines after dancing with the heir to the throne at the Llangollen International Musical Eisteddfod in North Wales.

Troupe leader Narinder Singh couldn’t believe his luck when Prince Charles joined in the impromptu routine on a visit to the event with the Duchess of Cornwall.

He and his dancers are big fans of the festival which is being celebrated for the 70th time this summer, from Tuesday, July 5, to Sunday, July 10, and he says that anyone interested in attending can contact them by e-mail to get all the inside information they require.

Narinder said the magical royal moment was so typical of Llangollen’s spirit of fun and international friendship that he’s happy to accept the invitation to spread the word about the annual event to potential competitors and visitors from Nottingham and the East Midlands.

Narinder said: “I’m absolutely delighted to become a Llangollen Ambassador and to let people know what a fantastic event the Eisteddfod is.

“I first came here as a visitor in the 1970s and then later as a competitor with the dance group so I know what a fantastic event it is.

“You meet people from around the world and get to learn about their music and culture. There’s a great atmosphere throughout the week of the festival.

“I also think it’s wonderful how it has grown and thrived throughout the years from a tent to the fantastic building it’s based in now.

“Another amazing thing about it is the way it is run by volunteers from the local community.

“I’ll be coming to this year’s Eisteddfod with the dance group and we’ll no doubt be performing for the public a number of times.

“As this will be the 70th Eisteddfod it’s going to be a very special occasion which I wouldn’t miss, and to help get people from my area there as an Ambassador is a marvellous opportunity.”

Narinder first visited the Eisteddfod in 1978 and has been coming back regularly ever since.

He said: “I came upon it by chance when I was visiting North Wales on my honeymoon that year.

“I started the Sheerer group after becoming interested in bhangra, the traditional Punjabi dance celebrating harvest time, when I was studying to be a pharmacist at Leicester University.

“We first competed in 1980 and two years later won the folk dance competition, which we did again the following year.

“Although we didn’t actually compete again after that we’ve been going back regularly to Llangollen every year, either as a group or individuals.

“Last year I got eight members of the group together and we came over. We have a couple of dancers and five musicians on tambourines and a traditional instrument called a chimta – two steel bars with bells attached.

“Little did we realise that we’d be at Llangollen for the Prince of Wales’s official visit.

“We were lucky enough to meet him and to have a nice little chat with him as he walked around the field.

“I then asked him if he’d like to join us and couldn’t believe it when he had a little dance with us. He was very co-operative and had a smile all over his face. It was something wonderful I’ll never forget. 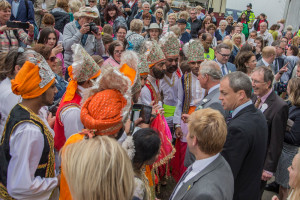 “I’ve now taken the liberty of writing to Clarence House to see if the Queen would like us to dance as part of her 90th birthday celebrations this summer and they’ve said they’ll be back in touch with us, so now it’s fingers crossed.”

Llangollen 2016 Chairman Rhys Davies said: “We’re thrilled that both choirs have agreed to be ambassadors for the festival to spread the word about what a wonderful event it is.

“They will be able to give people in the Herefordshire area an inside track on what it means to attend, where to go and what to see and even how to enter any of our competitions.

“Most of all they can tell them how friendly Llangollen is and about the fantastic carnival atmosphere as this little town welcomes the world each July.”

Ticket sales for the concerts at this year’s Eisteddfod are already going well, especially for the opening night when superstar Katherine Jenkins gets the programme off to a sensational start as she sings Bizet’s Carmen.