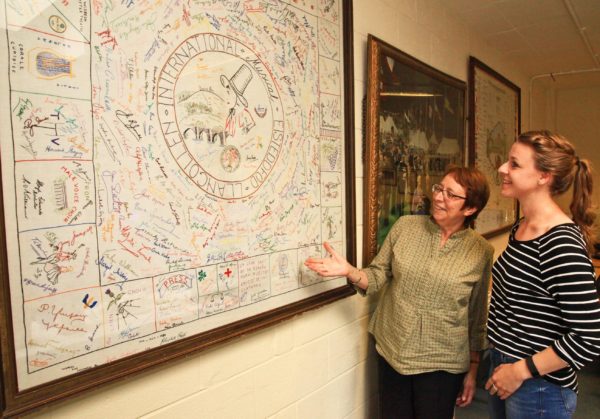 A tapestry created by a refugee from 1950s Czechoslovakia who became a Llangollen International Music Eisteddfod volunteer is to go on display at next year’s festival.

The framed tablecloth, decorated with the hundreds of embroidered signatures of former Eisteddfod visitors and competitors, hangs in the festival’s Press Office but retired language teacher, Darina Gaffin, of Froncysyllte, who herself volunteers as one of the eisteddfod’s Floral Team, wants to see her mother’s work go on public show.

The autographs include those of former prime ministers Harold Wilson and Ted Heath as well as Princess Anne and Princess Margaret and her then husband, Lord Snowdon.

Darina, who was born in Bratislava, escaped from her native Czechoslovakia along with her parents, Edmund and Magda Markovits, after communists seized control.

The family moved to Northamptonshire, where Magda had spent the war years before eventually relocating to North Wales.

Darina said: “My father fought in the Second World War with the Czech army. He was sent to the Russian Front and fought the Germans. Very few people came back from the Front but he survived although he never spoke of his experiences.

“My parents had been in Britain when the war broke out and my mother spent the war years in Northamptonshire. After the war ended they were repatriated to Czechoslovakia along with my elder brother, who was born in Britain.

“They fled to Britain when the communists took control. In fact my brother had been sent to Northamptonshire a year earlier.”

Darina says that the family settled in Northamptonshire but moved to Froncysyllte after seeing an advertisement for a property which they imagined they could turn into a guest house.

She said: “After they arrived in North Wales they were soon involved with the Eisteddfod as dad spoke 10 languages fluently and mum six.

“Dad worked for Monsanto as a librarian and technical translator. He was offered a role with GCHQ as a translator but opted to remain at Monsanto.”

“In those days, this was the early 1950’s, very few people spoke a second language so the fact my parents could speak so many meant they were in demand as interpreters.

“My mother also volunteered in hospitality and I was always dressed in my little Czech national dress costume.

She added: “My mother had the idea of tracing the signatures of competitors, visitors and guests of Llangollen onto a huge table cloth which was also decorated by local artists.

“My mother and a team of needle workers then embroidered the signatures and drawings to create a work of art that is a real snapshot of the festival’s rich history. The project began in 1954 and wasn’t completed until 1980.”

And like her parents languages have played a key role in Darina’s life.

She said: “I speak French, English and German as does my husband, George. We are both retired language teachers. And one of our two sons, John, is head of languages at a Rugby grammar school.

“Our eldest son, George, lives in New York where he works as an IT scientist in the banking sector.

“George is married to a Russian, Lyudmila, he met in New York and they have two children, Andrew, eight, and Julia, five. Our daughter, Jenny, is a priest on Hayling Island near Portsmouth.”

She added: “I’m glad the tapestry will go on show at next year’s Eisteddfod. It deserves to be seen and enjoyed by as many people as possible. It’s certainly something I’m very proud of.”

Jana Zupan, 24, of Volkertshausen, Baden-Wurttemberg, Germany who is working at the Llangollen International Music Festival on a four week work placement through her German university, admired the tapestry with Darina and said she thought it was beautiful.

She said: “It must have taken a very long time to complete and it really is amazing. Seeing the names of so many people from different nationalities is what the festival is all about.”