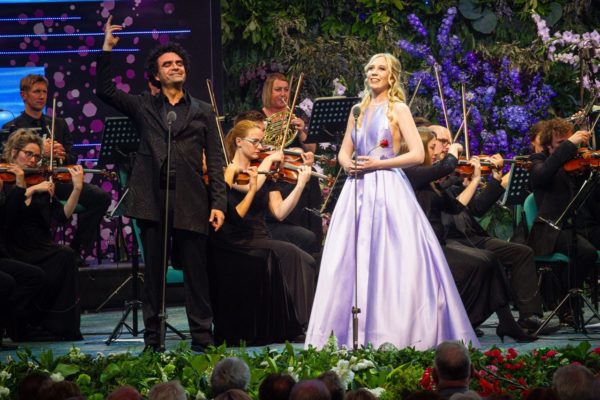 Rolando Villazón left the audience in awe following his first performance in the UK this year. The world-class tenor headlined Llangollen Musical International Eisteddfod for the first time on Tuesday night in a mesmerising classical gala.

In a week that promises an exciting selection of performances, Villazón followed Jools Holland’s sensational opening concert on Monday night.

Villazón’s uniquely compelling performances in leading opera houses across the globe have firmly established him as one of the classical music world’s most critically acclaimed, leading tenors of our day.

The concert opened with an impressive orchestral introduction, building the excitement to Villazón’s Eisteddfod debut. He started his performance with a compelling rendition of L’esule by Giuseppe Verdi (arr. Berio) accompanied by the British Sinfonietta led by the young maestro, British conductor, James Hendry.  Following in the footsteps of opera legends that have previously performed at the festival including Luciano Pavarotti and Bryn Terfel, Villazón’s passionate performance was awe-inspiring, enthralling the crowd from start to finish. Villazón’s outstanding artistry and emotive performance offered a memorable evening for all attendees of the second evening concert of week for the Eisteddfod.

Villazón was joined by magnificent Welsh lyric soprano Rhian Lois who has previously performed with the English National Opera. Both singers appeared at home on the stage as their vocals blended beautifully in a number of memorable duets. The pair concluded their performance with a playful reimagining of Wolfgang Mozart’s Papageno-Papagena from ‘The Magic Flute’.

Rising star and soprano vocalist, Charlotte Hoather opened the concert and accompanied the captivating French-Mexican Tenor in a fantastic interpretation of a collection of classical songs.

International Eisteddfod Music Director, Edward-Rhys Harry, said “Wow I have never experienced such energy from the stage! Villazón with Hendry was an inspired partnership. The stage ignited with such stunning performances from all the artists, and we are all so privileged to have experienced this tonight.”