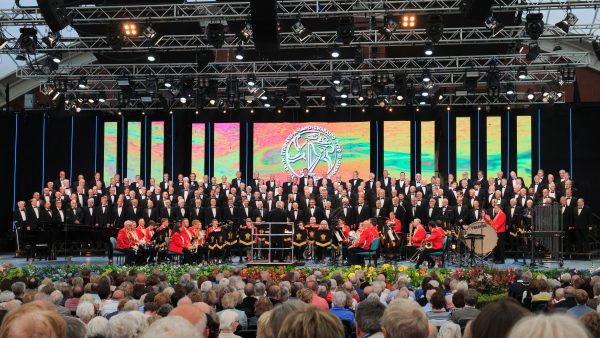 International Voice of the Future 2015 winner, Meinir Wyn Roberts, also took to the stage with the impressive line-up for the landmark opening concert, making the leap from competition winner to headline performer in just two short years.

The soprano from Caernarfon gave a stunning rendition of O mio babbino caro, before the formidable choirs joined voices to perform The Rhythm of Life and David Childs provided a stunning performance of Carnival of Venice.

The concert also featured the presentation of the Rotary International Peace Award, which was jointly won by British Ironworks and MSF.

Featuring operatic choruses, inspiring classical favourites and some of Wales’ best-known hymns, the opening concert was a spectacular celebration of brass and voices, which came to a roaring conclusion with Cory Brass Band’s performance of Tchaikovsky’s Finale, Symphony 4 and powerful performances by the four choirs of Cwm Rhondda and Tydi a Roddaist.

Monday night marked the start of a week of music, dance, celebration and family fun. With performances from artists as diverse as Sir Bryn Terfel, Kristine Opolais and Kristian Benedikt in Tosca, Gregory Porter, The Overtones, Christopher Tin and the Llangollen Celebration Chorus, Manic Street Preachers, Reverend and The Makers and BBC Radio 1 DJ, Huw Stephens following later in the week.

For more information or to purchase tickets for the 70th anniversary Llangollen International Musical Eisteddfod, including Llanfest, please click here