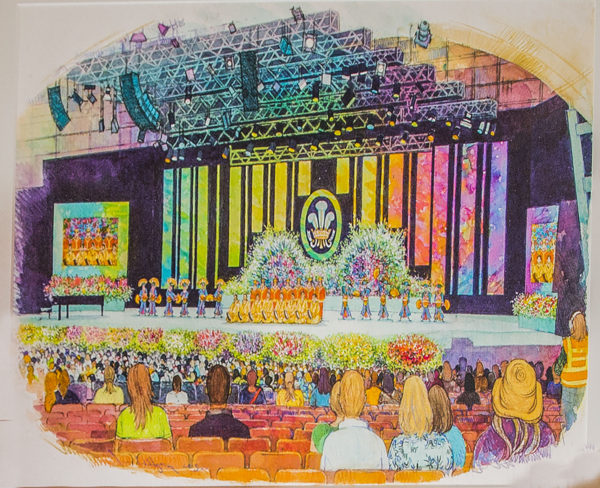 A signed cartoon by legendary singer-songwriter Burt Bacharach of his hit song Raindrops Keep Falling On My Head is to be auctioned for Llangollen International Musical Eisteddfod.

The 87-year-old American superstar penned the cartoon on a blank postcard for the iconic festival, writing the first bar of music on one side with some raindrops and then signing the other side. 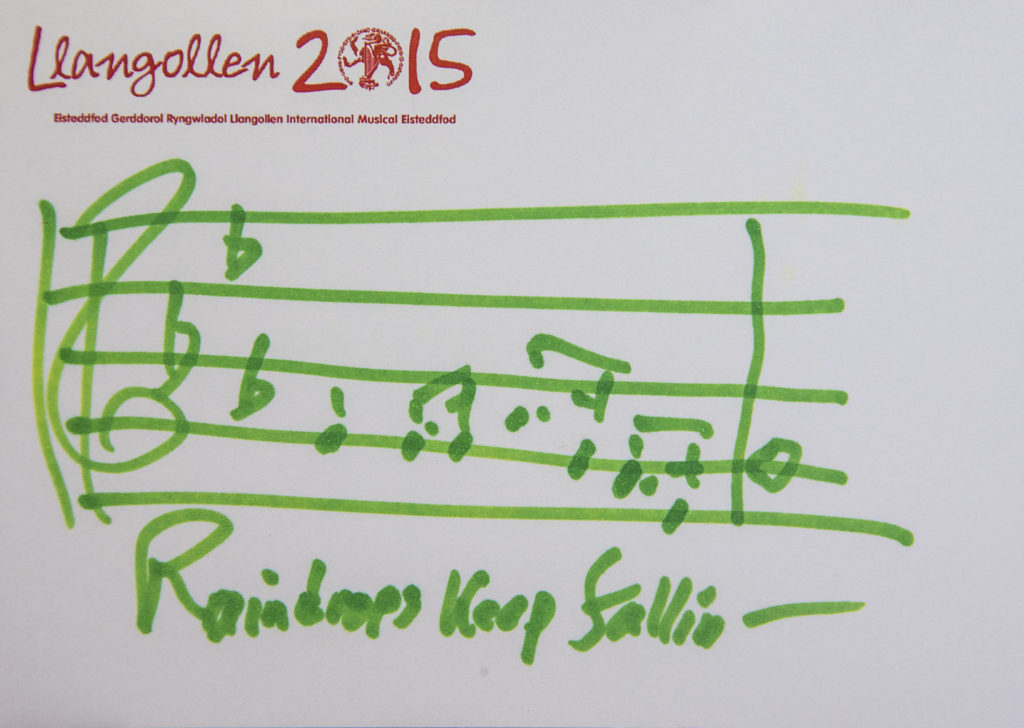 The Oscar-winning song was originally written by Bacharach and Hal David for 1969 film classic Butch Cassidy and the Sundance Kid and sold over two million copies for singer B J Thomas.

Bacharach performed it at Llangollen and it has become a standard over the years, recorded by artists from Johnny Mathis and Sacha Distel to the Manic Street Preachers.

The autographed cartoon is one of several lots being auctioned at Llangollen Town Hall on Saturday, May 21, at 7.30pm at an Eisteddfod fundraiser of Cheese, Wine and Musical Crackers in collaboration with local show choir, Stage 2 Stage.

Also going under the hammer is a watercolour painting of the stage at last year’s Eisteddfod by acclaimed local artist Ian Wildgoose as well as more cartoons by a range of those who performed last year including Rufus Wainwright and his sister, Lucy, Royal composer Paul Mealor, harpist Catrin Finch, West End star Sophie Evans, the nation’s favourite choirmaster, Gareth Malone and others.

One of those is a sketch of Go Compare’s TV advertising star Gio Compario by the man who plays him, top Welsh tenor Wynne Evans, and among the signed items are Welsh rugby shirts autographed by veteran British rockers Status Quo and Britain’s Got Talent star Jonathan Antoine and a guitar signed by reggae maestros UB40.

The full list of lots to be auctioned is online at https://international-eisteddfod.co.uk/wp-content/uploads/2016/04/Auction-Catalogue.pdf with information on how to bid.

Eisteddfod Committeemen Gareth Edwards and Adrian Farrell came up with the brainwave for the auction and collected most of the items though volunteer Louise Morris suggested the cartoons which were gathered by Eisteddfod Events Co-ordinator Sue McEvoy who said: “We had these blank postcards and it seemed a good idea to ask the artists to draw something. 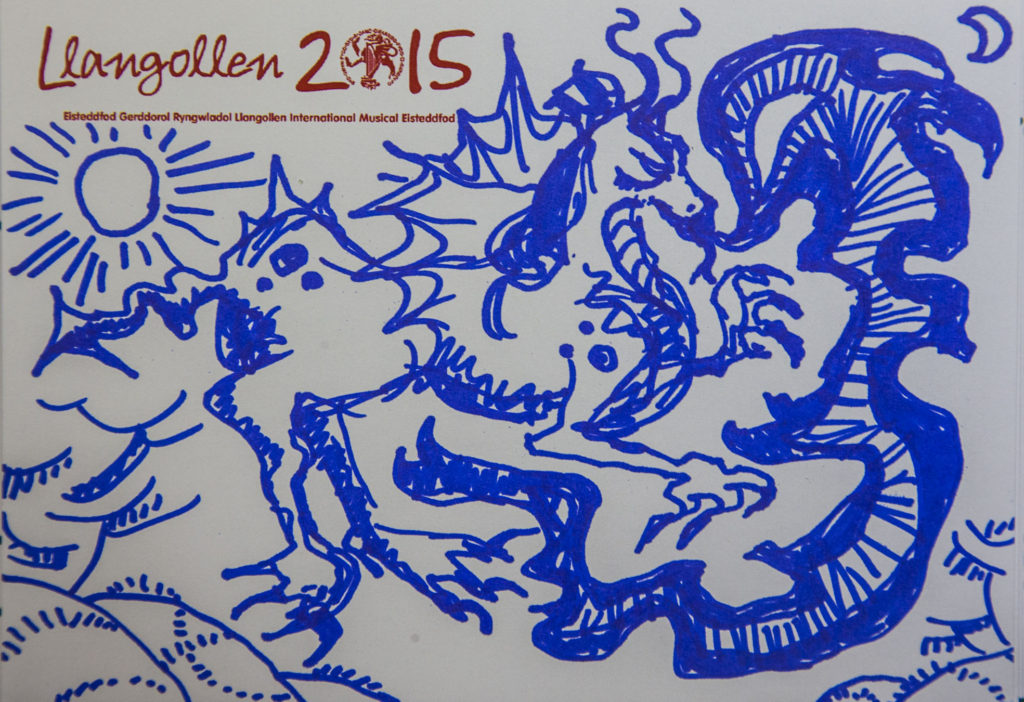 “They were delighted to do so and there are some really good cartoons. Rufus Wainwright has done a dragon and his sister, Lucy, has done two, one a picture of a barge on the canal.

“Burt did the first bar of music for Raindrops Keep Falling On My Head, complete with raindrops, Wynne Evans drew Gio Compario with his frizzy hair and moustaches and some musical notes while Catrin Finch has done a finch sitting on a treble clef.”

The event organisers are expecting plenty of interest and bids can be registered ahead of the event by ringing 01978 862001.

The Ian Wildgoose painting has a reserve of £1,000 while the postcards are being auctioned in groups with a reserve of just £30 while the Status Quo-signed rugby shirt has a minimum of £200.

The auctioneer will be Ian Lebbon, Chairman of the Eisteddfod’s Marketing Committee, and the organiser has been Eisteddfod Volunteer Team member Louisa Jones, a member of local show choir Stage 2 Stage.

They will perform a two-set programme of popular songs from musical theatre and screen, accompanied by a five-piece band, and including hits from Les Misérables, Evita and West Side Story and medleys from Chicago and Guys and Dolls.

Colin Roberts, secretary of the Eisteddfod’s Grounds Committee and member of the singing group said: “One of Stage 2 Stage’s main objectives is to support local organisations in their fundraising activities by providing high quality, affordable entertainment.

“Several of us have close connections with Llangollen Eisteddfod, therefore it seems only natural that we would give our support to an event which we hope will generate a good sum for Eisteddfod funds.” 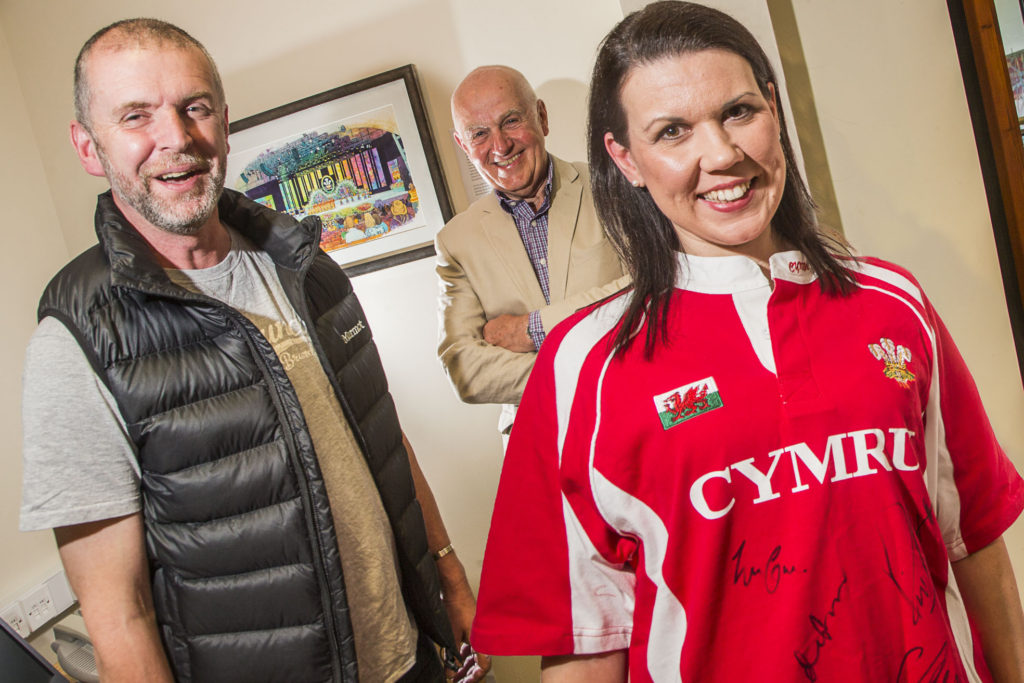 Tickets for Cheese, Wine and Musical Crackers are priced at £12 and include a glass of wine on arrival and cheese and biscuits during the interval.

They can be purchased directly from the Eisteddfod Office, by phone on 01978 862001 or from Llangollen Tourist Information Centre.

Bidders must give Name, Address, Telephone Number and/or E‐mail address, plus the Lot number, including a short description, with a starting bid and maximum bid in Pounds Sterling. All bids received via phone, e‐mail or post will be treated as strictly confidential.

All bids must be received by 5pm on Wednesday, May 18.