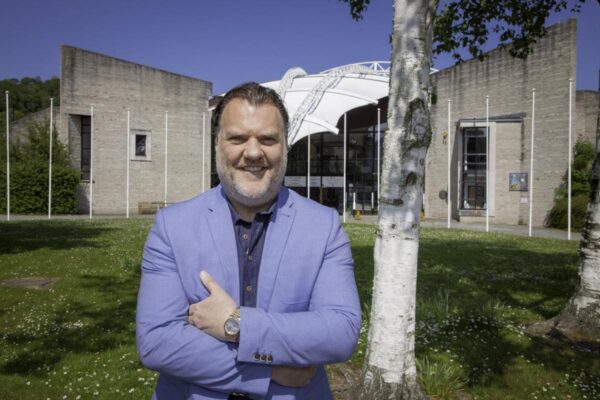 Opera star Sir Bryn Terfel and First Minister Mark Drakeford are leading a chorus of congratulation for an iconic festival that’s celebrating its 75th anniversary.
Also among those who’ve sent their best wishes to Llangollen International Musical Eisteddfod is the popular singer and TV presenter, Aled Jones, who will be performing at this year’s event.
After a Covid-enforced absence, competitors are returning to Llangollen just in time to mark the momentous milestone.

The festival was established in 1947 under the dark shadow cast by the Second World War as a way of promoting peace through musical harmony and dance.
Since then hundreds of thousands of competitors from all over the world have beaten a path to the picturesque Dee Valley town where Wales meets the world.
The pandemic put a temporary halt to the festival as a physical event and it took on a virtual format last year, with performances streamed online.
But preparations are well under way for this year’s comeback Eisteddfod, which starts on Thursday, July 7 and culminates with Llanfest on Sunday, July 10, when the eisteddfod will join forces with the Llangollen Fringe Festival.
Over the years the festival has helped launch the careers of global stars like Luciano Pavarotti.
After competing on the famous pavilion stage as an up and coming young base baritone from Pantglas in Gwynedd, Sir Bryn went on to forge a stellar career as one of the world’s greatest opera singers.
In a specially recorded video message, Sir Bryn said: “I send my heartfelt congratulations to the Llangollen International Musical Eisteddfod as it celebrates its 75th anniversary.
“I have great memories of Llangollen as a young emerging artiste competing there and the returning to perform in the evening concerts – always truly inspired in the thoughts one was following in the footsteps of truly great artistes.
“I myself returned to the pavilion for performances of Tosca by Puccini and Sweeney Todd by Stephen Sondheim.
“A truly unique event that is lauded as an international treasure – the people, the stage, the audiences, even all those beautiful flowers at the front of the stage making such a truly memorable and unique experience.
“Llongyfarchiadau enfawr i chi i gyd yn Llangollen a chariwch ymlaen (Congratulations to you all in Llangollen and carry on).
First Minister Mark Drakeford is also a big fan of the event and what it stands for.
In his video, he said: “The Llangollen International Eisteddfod is truly an icon of the Welsh cultural landscape, and it’s particularly exciting to be able to welcome in person attendees back to the event and back to Wales this year.
“So many of us have memories of attending the international eisteddfod in its beautiful North Wales location at different points in our own lives.
“Even those who have yet to visit will be aware of the wealth of inspiring images that emerge from the event each summer as Llangollen plays host to cultural guests from right around the globe.
“Many of these overseas performers are visiting Wales for the first time and we know how struck they are by the warmth of the welcome with which they are received.
“As relevant today as when it was first established in the aftermath of the Second World War, the overriding message of the International Eisteddfod is of international harmony and cooperation and it gives us that annual opportunity to reflect upon these vital priorities.
“And more than anything Llangollen gives us a practical demonstration of how effectively a shared cultural experience can contribute to these goals of international cooperation. Long may that continue.
“Finally let me add my personal thanks and note of appreciation for all those achievements of the last 75 years.
“I wish everyone involved the very best of luck for this year’s event and for Llangollen’s very special anniversary celebration.”
Clwyd South Senedd Member Ken Skates is a long-standing supporter of the Eisteddfod.
He said: “This is the first time since 2019 that the event is going to be taking place physically because of the pandemic and my goodness me the International Eisteddfod is just as relevant today as it ever was.
“Today with what’s happening around the globe but particularly in Ukraine it makes the International Eisteddfod just so important and just as relevant as back in 1947. “So the Eisteddfod has been assisted over the years by many individuals and many organisations including the Welsh Government who have supported it financially through some difficult and challenging times.
“And the Llangollen Eisteddfod located in the magnificent Dee Valley in the beautiful town of Llangollen is always welcoming to people from around the world and I know this year will be as welcoming as ever, diolch.”
During the four-day event, there will be a host of new attractions and activities on the revamped outdoor site, including music, dance, talks, comedy, food, drink, shopping, workshops and pop-up entertainment.
In the evenings there will be concerts featuring the singing duo of Aled Jones and Russell Watson and Anoushka Shankar, the British-Indian-American sitar player, producer, film composer and activist who is a half-sister to singer Norah Jones.
In his video message, Aled said: “Just want to say a huge congratulations to Llangollen on their 75th anniversary. I am so proud to part of the amazing event this year. Llongyfarchiadau (Congratulations”).
The competitions climax on Saturday night with Choir of the World and the contest for the Pendine International Voice of the Future featuring the finest young singers from around the world on the stage where Placido Domingo, Kiri Te Kanawa, Elaine Paige, Michael Ball, Sir Bryn Terfel and Luciano Pavarotti have performed.
This year’s Eisteddfod is a shortened version of previous years but will still pack plenty in with a full programme of competitions in the Pavilion and starting on Thursday with Schools Day and the Young Peacemaker Awards.
Sunday sees the Eisteddfod let its hair down for Llanfest before the climactic final concert featuring indie rock stars Amber Run, blues powerhouse Elles Bailey and Bajan-Welsh singer songwriter Kizzy Crawford