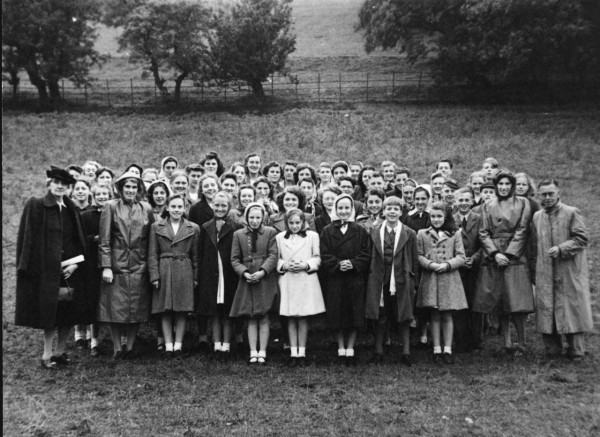 Members of a Cardiff children’s choir that won at the first ever Llangollen International Musical Eisteddfod are still going strong as the 70th event approaches.

Back in 1947, the Cardiff Snowflakes took the inaugural festival by storm, being crowned the champion children’s choir and going on to make records and tour extensively.

An appeal by the Eisteddfod in Cardiff has found several of the choir members are still meeting – and still singing – almost 70 years later.

Now aged 82, former singer Pauline Lang remembers the excitement of performing at the famous Eisteddfod that has since played host to music legends such Pavarotti, Lulu and Status Quo.

She and her friend and fellow chorister Lila Donovan still keep in touch and have fond memories of the early days of the iconic event.

Pauline said: “It was a wonderful experience. I was a bit nervous and we all had butterflies but everyone was lovely and I loved going up to Llangollen.

“We were in the big marquee and it was nice out on the fields meeting all the other performers from all over the world. We couldn’t converse with them in their language but it was great fun and there were a lot of impromptu folk dances and sing-songs.

Cardiff Snowflakes on the Eisteddfod field and conducted by Eira Novello Williams.

“I think it helped that we had good weather,” added Pauline who lives in Fairwater, Cardiff, with her husband of almost 60 years, Arthur.

The Snowflakes were formed in 1926 by Gwenllian Williams and later continued under her daughters Eira Novello and Marion Williams.

Pauline joined the singers after her parents suggested it and made friends immediately with the other girls in the choir.

She said: “The first time I walked in I met up with someone I’d been in infant school with and we still keep in touch now so must have been friends for something like 78 years.

“We went back to the Eisteddfod in 1949 and we won it then as well and after that we went on to make three records with the Decca label.

“We were pretty successful and used to tour and compete all over the country as well as going over to Copenhagen for a few weeks to sing.”

While Pauline left the choir when the first of her three children was born, many members used the experience to launch their careers, with one former Snowflake heading to Hollywood.

Ira Stevens left her home in Dogo Street, Cardiff, in 1936 for Los Angeles as the body-double for Shirley Temple, appearing in several films before returning to Wales in 1939.

“I still enjoy music,” said Pauline, who worked as a typist and now has six grandchildren. “But I’m afraid my voice is too croaky to sing now.”

However, her fellow former Snowflake Lila Donovan, also from Cardiff, has never stopped singing since those early moments starring at the Eisteddfod.

“I had some wonderful years in The Snowflakes,” said Lila: “My mother and father were both musicians with the Salvation Army so they suggested that my sister and I went along.

“I can’t thank them enough for that as it led to so many adventures. We travelled all over the place, even to Denmark, and I made some wonderful friends who I have kept in touch with for years.

“I enjoyed every minute of the Eisteddfod and I think we sang Springs Return for that although I can’t be sure, it’s hard to remember all the details from so long ago.”

Lila went on to marry and work as a teacher, although the couple never had children of their own. Now widowed she still spends time at her local school listening to the little ones reading as well as carrying on with the hobby that has stuck with her through life – singing.

“I am a member of an operatic society now and so still sing a lot. It keeps me pretty busy and I love going up on the stage as well. Its things like that that keep you going and I suppose I’ve been singing my whole life now,” Lila added. 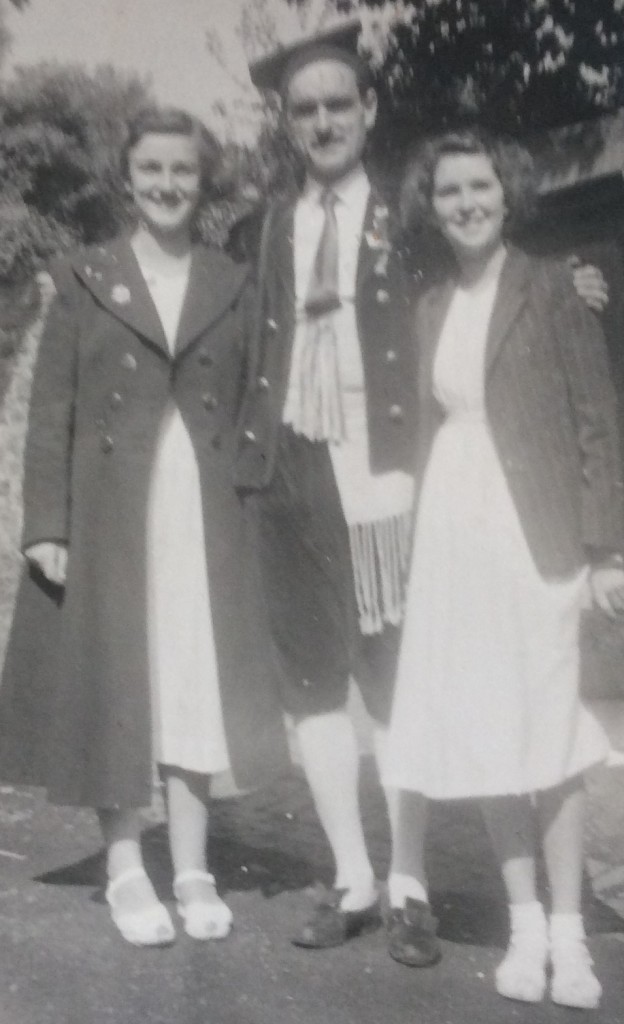 Snowflakes choir members meet a Spanish competitor at an early Eisteddfod, Marian Hughes is on the right.

Another fellow Snowflake, who joined just after the famous first Eisteddfod performance but was there to lift the crown for the second time in 1949, was Marian Hughes.

Now 77, the widow from Whitchurch, in Cardiff, remembers the group and her singing days with fondness, saying: “I have so many lovely memories of those times. After the performance in 1949 the whole world opened up for us.

“It just grew from there. One minute we were on stage with Harry Secombe or recording with the BBC Welsh radio service and of course there was the trip to Denmark that was absolutely unheard of in those days.

“We were doing concerts all over the place – it was quite amazing. I’ve been singing ever since and am still part of a local community choir along with five of the other Snowflakes, so we still sing together on a Saturday morning,” she added.

The festival’s Musical Director, Eilir Owen Griffiths, who lives in Cardiff, said: “It’s fantastic that these ladies have such wonderful memories of Llangollen and that they can recall them so clearly.

“We’d be delighted to welcome them and any other members of the Snowflakes up there again and I’m sure they would find the welcome as warm as ever.” 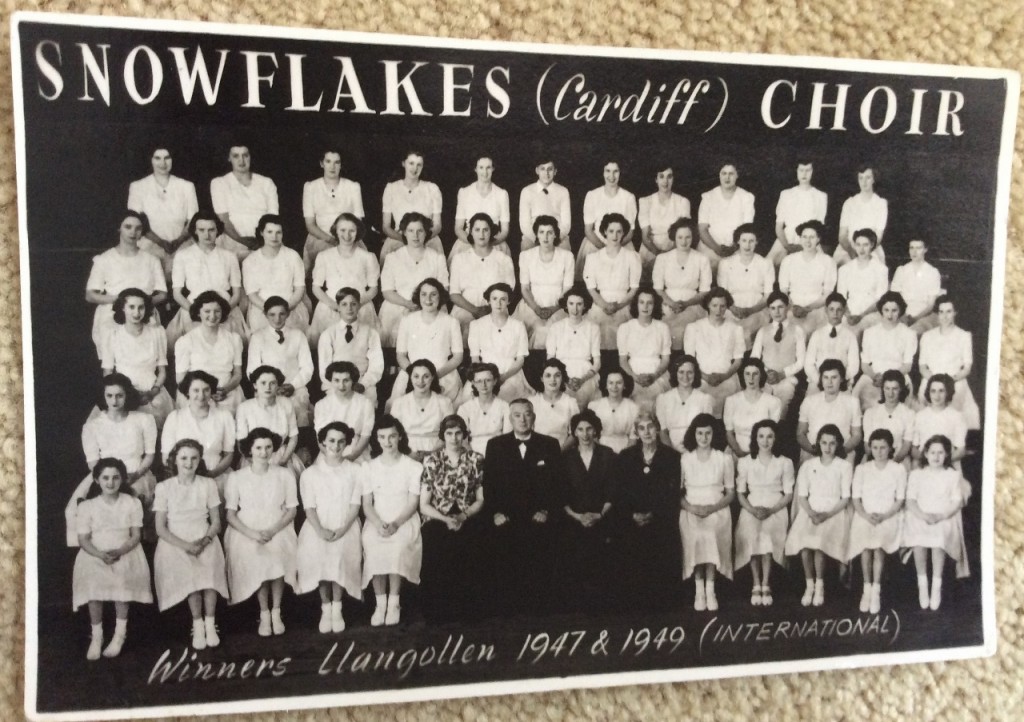 The Snowflakes were just one of several Welsh choirs at the first Llangollen Eisteddfod and others included Penarth Ladies Choral Society and the Mid Rhondda Ladies Musical Society who competed against choirs from across the UK, Belgium, Portugal, Italy, Spain, Sweden, Switzerland, Denmark, the Netherlands and Hungary.

This year’s Eisteddfod, which begins on Tuesday, July 5, will attract competitors from even further afield and concert ticket sales are already going well, especially for the opening night when Katherine Jenkins gets the programme off to a sensational start as she sings Bizet’s Carmen.

Wednesday will be International Children’s Day and will include choral and dance competitions and also a new Under 16s solo competition while the evening will feature the Voices of Musical Theatre, West End star Kerry Ellis and classical boy band Collabro.