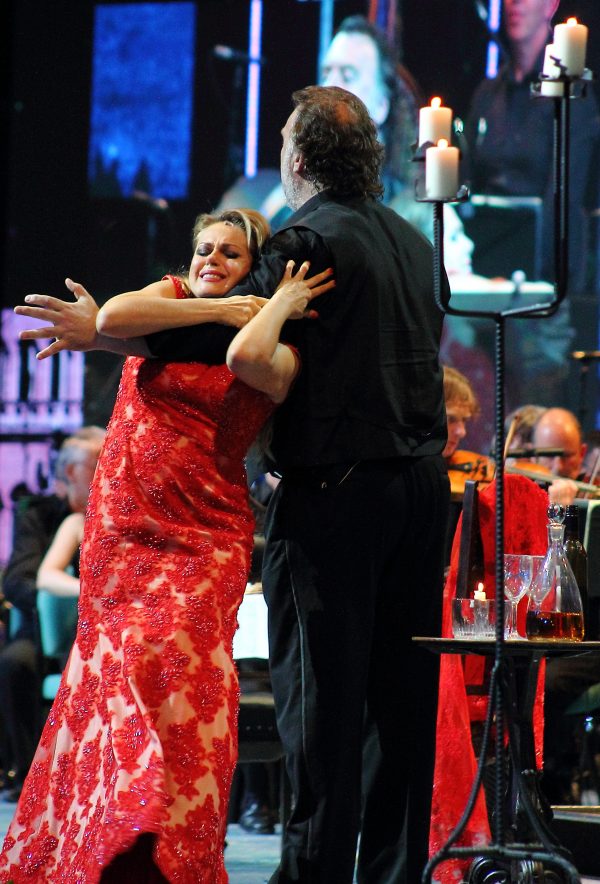 Crowds at the Llangollen Eisteddfod were brought to their feet to deliver a roaring standing ovation following a breathtaking performance of Puccini’s Tocsa on Tuesday 4th July.

The performance at the International Eisteddfod, sponsored by Pendine Park, featured three of the opera world’s most admired talents, accompanied by the acclaimed Welsh National Opera Orchestra, and saw a successful end to the second day of the 70th anniversary festival.

The world-class line up also featured rising young talent including locally-recruited Joseph Elwy Jones as the Shepherd Boy and North Wales baritone Steffan Lloyd Owen, who is only the second student from the Royal Northern College of Music to ever win the prestigious Kathleen Ferrier Award. The cast was also joined by students from Ysgol Maes Garmon in Mold who performed in the chorus.

“From the world class artists and bourgeoning local talent, to the subtle staging and stunning video work this wonderful opera was brought perfectly to life.

“The performance combined the excellence and expertise of its Welsh and international team, highlighting both the Llangollen Eisteddfod’s ability to attract global artists and showcasing the country’s intrinsic talent.”

Speaking after the performance, Dr Rhys Davies, Chairman of the Llangollen Eisteddfod, said: “The 70th anniversary International Eisteddfod has got off to a fantastic start. On Monday night our rousing opening concert really showcased the very best of what Wales has to offer, with performances from the Cory Brass Band with formidable local Male Voice Choirs Fron and Rhos performing alongside Canoldir and Colne Valley, under the leadership of the incredible Owain Arwel Hughes CBE.

“It was also fantastic to see Meinir Wyn Roberts starring in this opening concert, just two years after being named International Voice of the Future at Llangollen. It just highlights clearly how Llangollen’s competitions act as a springboard for talented young singers. We’re certainly looking forward to seeing what future international stars this years competitions reveal when they get underway tomorrow [WEDNESDAY 5TH JULY].

“International Children’s Day [TUESDAY 4TH JULY] was also a great success with more than 3,000 children attending. There were thousands of happy, smiling faces in the pavilion as the Peace Message was delivered and the visiting schools sang happy birthday to the Eisteddfod. The weather also appears to be smiling upon us – not too hot and not raining – may that continue throughout the week.

“Tosca was absolutely brilliant, with world-class opera heavyweights gracing the pavilion stage alongside young talent such as Steffan Lloyd Owen and Joseph Elwy Jones. Joseph was recruited recently through open auditions for the part of the Shepherd Boy and perfectly fitted the bill. When Sir Bryn Terfel took to the stage with Kristine Opolais and Kristian Benedikt the atmosphere truly electric! “This year’s Eisteddfod is certainly shaping up extremely well and I’m looking forward to the rest of the week, in particular seeing the Llangollen Celebration Chorus performing Calling All Nations under the direction of Christopher Tin tomorrow night [WEDNESDAY 5TH JULY].”