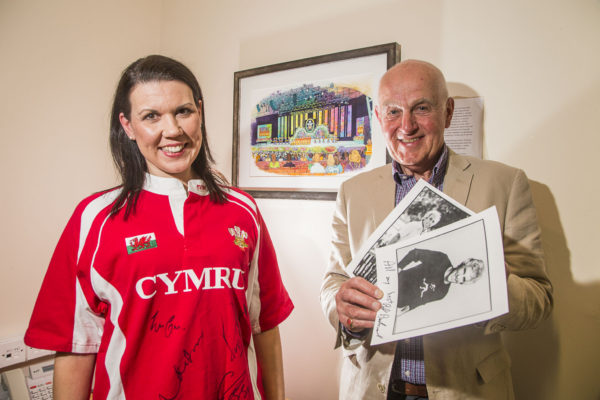 A Wales rugby shirt signed by veteran rockers Status Quo made £350 at an auction in aid of the iconic Llangollen International Musical Eisteddfod.
The auction was part of a musical evening at Llangollen Town Hall featuring locally-based choir Stage 2 Stage who brought a packed audience to their feet and then had them putting their hands in their pockets to the tune of over £1,700.
There was some furious bidding for the Quo shirt and for a signed cartoon by legendary singer-songwriter Burt Bacharach of his hit song Raindrops Keep Falling On My Head which realised £210.
The concert, compered by Eisteddfod stalwart Christine Dukes and musically directed by Elen Mair Roberts, featured a two-set programme by locally-based choir Stage 2 Stage in which they showcased songs from a host of shows and films, from Guys & Dolls and Chicago to Evita and Breakfast at Tiffany’s.
At the end of the performance the packed audience gave them a rousing standing ovation.

In the auction which followed, conducted by Ian Lebbon, Chairman of the Eisteddfod’s Marketing Committee, 19 lots went under the hammer, including pieces of art connected with the festival and items signed by recent star performers such as Rufus Wainwright and Jonathan Antoine.
This year’s Eisteddfod, which begins on Tuesday, July 5, is being opened by superstar soprano Katherine Jenkins who gets the evening concert programme off to a sensational start as she sings Bizet’s Carmen.
Other highlights include the great Bryn Terfel headlining the 70th Classical Gala Concert on Thursday evening while Saturday is dedicated to the top choirs and concludes with the Choir of the World competition for the Pavarotti Trophy before Sunday sees the Eisteddfod let its hair down for Llanfest before the climactic final concert by keyboard wizard Jools Holland.