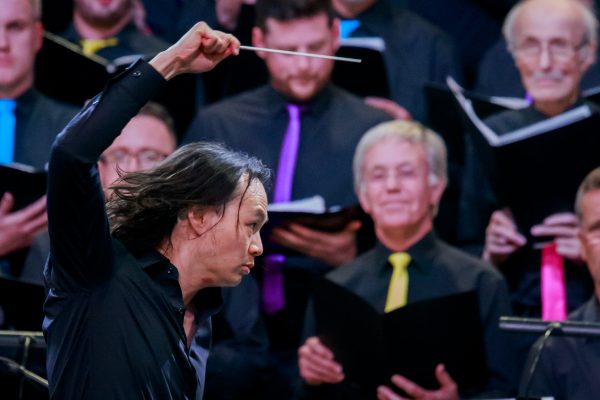 Communicating the message of global unity, the first half of the concert presented audiences with a spectrum of music from symphonic overtures to video game fantasies. The second half of the concert was a special performance of Tin’s song-cycle Calling All Dawns, which included his iconic composition for computer game Civilisation IV, Baba Yetu.

Tin was joined by a whole host of international soloists for the show – the first time Calling All Dawns has been performed in its entirety under Tin’s direction. These included Swansea soprano Elin Manahan Thomas, Mongolian singer songwriter, Nominjin, Portuguese Fado singer, Nathalie Pires and internationally acclaimed singer, Joel Virgel.

Accompanied by the WNO Orchestra, the multi-lingual and multi-cultural line up was further bolstered by Maori singers, David Jones and Lewis Whitiri, four international choirs from the USA, China and South Africa and the locally recruited Celebration Chorus.

Comprising of 100 amateur singers, the Celebration Chorus mastered songs in 8 languages for the evening show’s second half, including Swahili for Baba Yetu. It was this Grammy-award winning piece that stole the show, prompting riotous applause and a standing ovation from the audience both after the show and its encore.

Speaking after the show, LA-based Christopher Tin said: “The music we performed on the pavilion stage focused on the notion of unity, regardless of race, culture or religion which is perfectly in synergy with the Llangollen Eisteddfod’s foundations.

“It was an honour to work with such a diverse, talented and sizable ensemble. The show felt so uplifting and inspiring and that is down to the dedication of all the performers.

“In particular the Celebration Chorus, who have achieved so much in just 12 rehearsals – that’s less than 50 hours! I’ve loved every minute of my Llangollen International Eisteddfod experience and I hope to return very soon.”

Eilir Owen Griffiths, Music Director at the International Eisteddfod, added: “The show was incredible, so powerful and filled with myriad languages and musical styles, songs of joy, mystery, sorrow and hardship and well as songs of triumph and exultation.

“Baba Yetu stole the show and its encore had the whole house on its feet. This is the kind of performance that shows how the Llangollen Eisteddfod stays current and also keeps with its core traditions, attracting cutting-edge contemporary performers that innovate and span the boundaries of genres.”