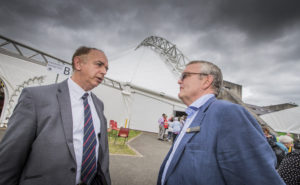 The Llangollen International Eisteddfod is a vital cultural event in Wales which deserves Government and private sector support, according to a veteran politician and Welsh Office Minister.

Lord Bourne, formerly Nick Bourne, the Conservative Leader in the Welsh Assembly and currently a Junior Minister at the Welsh Office, said: “The Eisteddfod is vitally important for Wales. It is one of the cultural icons we have alongside the Royal Welsh Show and the National Eisteddfod. END_OF_DOCUMENT_TOKEN_TO_BE_REPLACED