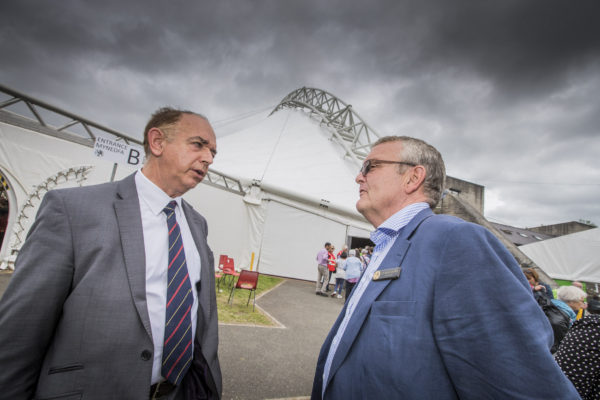 The Llangollen International Eisteddfod is a vital cultural event in Wales which deserves Government and private sector support, according to a veteran politician and Welsh Office Minister.

Lord Bourne, formerly Nick Bourne, the Conservative Leader in the Welsh Assembly and currently a Junior Minister at the Welsh Office, said: “The Eisteddfod is vitally important for Wales. It is one of the cultural icons we have alongside the Royal Welsh Show and the National Eisteddfod.

“It’s important locally to Llangollen and to Wales generally and people have a justifiable pride in it.

“It is important that it is supported both by Government and by the private sector and it’s good to see companies like Scottish Power and other friends of the Eisteddfod and businesses being involved in it.”

Another visitor to the event was Huw Thomas, Director of Christian Aid in Wales, who has fond memories of competing at the Eisteddfod with his Aberystwyth primary school.

He said: “The Eisteddfod and Christian Aid were both formed in the aftermath of the Second World War and we are now 70 years old while the Eisteddfod is being held for the 70th time.

“We now have a refugee crisis in Europe on a scale we haven’t seen in 70 years and it’s up to our generation to do something about the plight of these people.

“The referendum has unleashed a fear of strangers and what we must do as Christians is to show that cultural diversity is a good thing and that is why the Eisteddfod is so important in uniting people across cultures and languages.

“I came here as a boy with my school and it’s still a great cultural melting pot and a window on the world.”