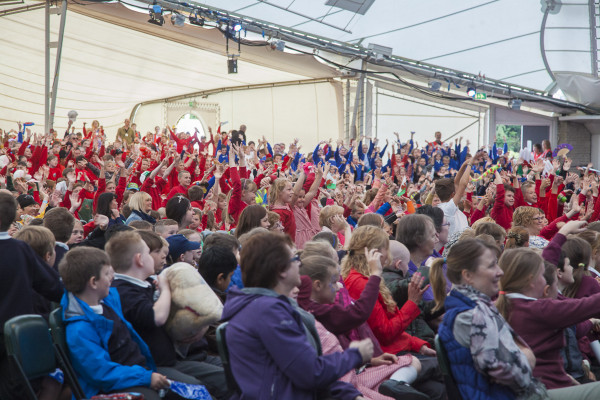 The crowds of young visitors will later head out on to the Eisteddfod field to enjoy a packed programme of street theatre complete with clown, stilt walkers and Bollywood dancing.

There will also be music and dance performances on the outside stages and a series of workshops.
The junior choirs competition will be at 1.30pm and the centrepiece of the day will be the colourful parade of competitors which will start winding its way through the town at4.30pm.
The concert will feature a rousing performance by The Alto Brass Ensemble, which includes a quintet of some of Wales’s finest brass players plus two percussionists, one of whom, Owen Gunnell, was voted a BBC Musician of the Year in 2000 and has gone on to become a star of the international performance circuit.
Children’s Day is being sponsored by the Pendine Park care organisation who are also supporting the Alfie Boe concert on the Thursday night, July 9.
Other big draws include Oscar-winning music legend Burt Bacharach, the immensely popular Canadian singer-songwriter Rufus Wainwright and TV choirmaster Gareth Malone.
There will also be the world premiere of a new work to celebrate the 150th anniversary of the Welsh colony in Patagonia in a concert that will also star former royal harpist Catrin Finch.
For the final concert, Ali Campbell, the voice of UB40 who sold 70 million records, who’ll be reunited on the eisteddfod stage with two other founding members of the group, percussionist, trumpet player and vocalist Astro and keyboard player Mickey in a concert sponsored by the Village Bakery.
The Children’s Day concert programme has been tailored to appeal to a young audience and includes such popular numbers as the rousing themes from the blockbuster movies Pirates of the Caribbean and Monsters Inc.
Owen Gunnell is famed for his expertise in introducing children to the excitement of music.
In 2003, he graduated from the Royal College of Music and has appeared as a soloist with the BBC Symphony Orchestra, BBC Concert Orchestra, London Sinfonietta, BBC Philharmonic, Britten Sinfonia, Macedonia Symphony Orchestra, the Royal Scottish National Orchestra, the Melbourne Symphony Orchestra and Sinfonia Viva.
He is one half of the percussion duo, O Duo, who have won many prizes and performed and been broadcast on television and radio all over the world.
O Duo are also well known as artistic directors for Children’s Classic Concerts in Scotland, curating and performing in a variety of concerts ranging from chamber size to symphony orchestra size.
Owen, who is based in East Anglia but has family ties in South Wales through his parents, promised that the event would be “fun, slick and interactive”.
He said: “I’ve worked quite a lot with children over the years, so I know that you’ve got to give them something that’s entertaining. I think we’re definitely going to do that with the programme we’ve chosen.
“We also plan to get some of the children in the audience up onto the stage so they can try for themselves some of the percussion instruments we’ll have like xylophones and vibraphones.
“I’m looking forward very much to being at Llangollen for such a fantastic occasion.”
Apart the ensemble, there will also be some dazzling performances by a number of the dance groups who are performing at the Eisteddfod later in the week and musical workshops which the children will be invited to join in.
Another highlight of the concert will be the delivery of the traditional Peace Message.
Since 1952, young people have sent out a poignant Message of Peace and Goodwill from the stage of the Eisteddfod during the Children’s Day concert.
This year the message will be delivered by pupils from Mountain Lane Primary School in Buckley.
Later on Children’s Day there’s a further musical feast planned to thrill the young audience in the Pavilion in the shape of a junior children’s choir competition featuring singers from 10 schools.
Contestants come from across Wales, England and as far afield as St Paul’s Co-ed Primary School in Hong Kong.
Throughout the day from 8.30am young Eisteddfod visitors can enjoy a colourful selection of children’s activities on the field including Bollywood dance workshops and street theatre featuring clowns, musicians and stilt walkers.
Rounding off a busy day will the iconic International Parade in which competitors from across the globe will process in their national costumes, flags fluttering, through cheering crowds from the Eisteddfod field to Llangollen town centre led by bands and Eisteddfod president Terry Waite in an open-top vehicle.
Children’s Day is sponsored by the award-winning Pendine Park care organisation who are also sponsoring the concert by superstar tenor Alfie Boe on the Pavilion stage on Thursday evening.
Eisteddfod Musical Director Eilir Owen Griffiths said: “The whole Children’s Day programme will have the accent firmly on entertainment.
“It promises to be an excellent day out which matches many requirements of the National Curriculum, linking awareness of global citizenship and culture with a pleasurable experience.
“The concert by The Alto Brass Ensemble has been designed to introduce children to the brass family of musical instruments and should be the Eisteddfod’s most inter-active concert experience ever.
“The concert programme includes two pieces – the themes from Pirates of the Caribbean and Monsters Inc – which children can very much relate to and enjoy.
“We are delighted to have Owen Gunnell as one of the ensemble who is a percussionist of international repute and famed for the way he works with children in an enjoyable and interesting way.
“This year’s Peace Message, to be delivered by the children from Mountain Lane Primary School in Buckley, is on the theme ‘one voice’ which signifies the way countries from many countries come together to sing together with one voice at the Eisteddfod.”