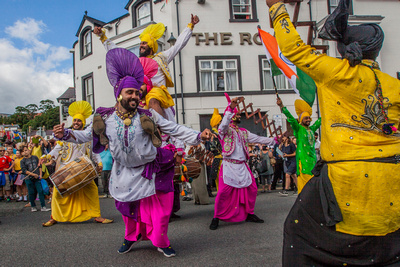 Being held for the first time on the Friday of the festival to give more competitors arriving from around the world the chance to join in, the colourful cavalcade saw contingents from across the globe march through the heart of Llangollen to the accompaniment of rousing cheers and applause from a record number of onlookers.

A rainbow array of banners and national flags fluttered above them as singers and dancers from a host of nations walked in procession from the Eisteddfod field, down Abbey Road, across the historic centuries-old bridge and on into the town centre where the main roads had been closed off specially for the occasion.

Heading the parade, which took around 20 minutes to go by any one point, was Llangollen’s bearded town crier, Austin Cheminais, ringing his handbell to herald the main event. 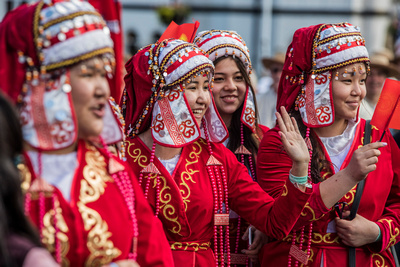 Behind him came Llangollen’s Mayor and Mayoress, Mike and Melanie Adams, followed by the purple banner of the town’s Mulberry language school, which was sponsoring the event.

Pace for the big parade was set by some stirring tunes from Llangollen Silver Band.

Eisteddfod President Terry Waite waved to the cheering crowds from his seat aboard a vintage Vauxhall with Eisteddfod Chairman, Dr Rhys Davies, riding in the back.

Behind them came a procession of competitors beneath their national flags including those of countries as far away as the United States, Canada, New Zealand, Indonesia and China.

Amongst the most eye-catching was a contingent of youngsters from Zimbabwe in their dazzling national costumes.

Interspersed with the overseas competitors in the parade line-up were a number of choirs from the UK, headed by the Nidus singers from Wales who had their black poodle mascot – wearing a dragon flag neckerchief – trotting by their side.

Following on behind was the Chanteuse choir from Staffordshire under their red and white flag of St George.

Another group of real crowd pleasers came in the colourful shape of the Bishop Anstey High School Choir from Trinidad.

Next in line were more of the English choirs followed by a group of Norwegian singers and an Indian dance troupe.

The maple leaf flag fluttered above a group of Canadian competitors, followed by the huge Stars and Stripes standards carried by a number of choirs from the USA.

Helping marchers keep time were the drummers of an Algerian folk group and close behind were a group of leaping Punjabi dancers.

Attracting huge applause as they brought up the rear of the parade were a group of Indonesian youngsters in their multi-coloured crinoline dresses. 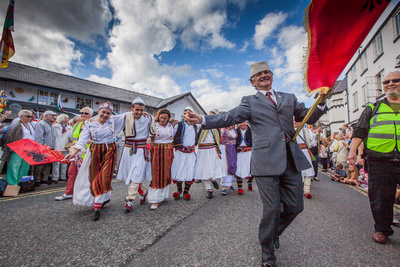 Eisteddfod Chairman Rhys Davies, who had backed the idea of moving the Parade to Friday from Tuesday, said: “We had a tremendous response from the competitors from all over the world who turned out in their hundreds and it was great to see so many people lining the streets as well.

“It shows the wonderful connection the Eisteddfod has with the world and with its own local community and the place it has in the hearts of so many people.”