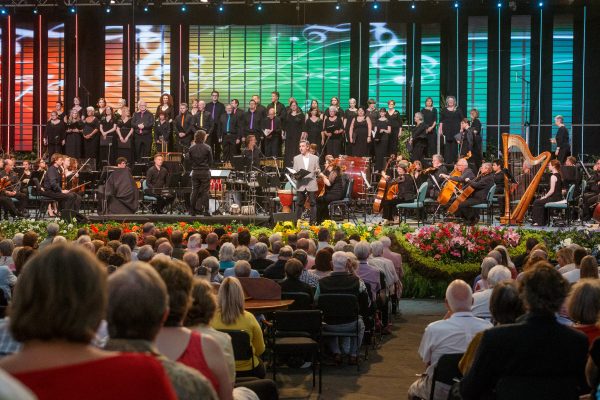 Calling A choir of 80 amateur singers is set to become the UK’s most multilingual chorus after learning an eight-language performance from scratch in just 10 rehearsals.

The piece features 12 songs in distinct languages including Farsi, Sanskrit, Swahili, Japanese, Irish, and Maori, eight of which have been taken on by the talented amateur choir.

It will be the first time ever that the complete piece has been performed live under Tin’s direction and features the theme to iconic video game Civilisation IV, Baba Yetu, which scooped the first ever Grammy for a video game song.

Eilir Owen Griffiths, Music Director for the Llangollen International Eisteddfod, said: “What the Celebration Chorus have achieved in just ten rehearsals – around 30 hours – is nothing short of incredible.

“These are ordinary people with jobs, families and studies to fit into their lives and yet they have managed to master not only the words and music to the piece, but also the nuances of intonation and pronunciation to really convey each song’s meaning.

“It’s hard to believe they have gone from being a group of near-enough strangers 10 rehearsals ago to a fully formed choir that we believe is potentially the UK’s most multilingual choir – if not the world’s!”

The international cultural festival, whose official anniversary falls on Sunday 11th June 2017, created the choir as part of its 70th anniversary celebrations. The festival was launched in 1947 to help heal the wounds of WWII and bring people together through music and dance.

Seventy years on, around 4,000 performers and as many as 50,000 visitors attend the festival to participate in its unique combination of competition and performance and enjoy the spirit of international peace and friendship.

Christopher Tin added: “The message of peace and unity is the very foundation of the International Eisteddfod and this has great synergy with my composition Calling All Dawns, which focuses on the notion of unity regardless of race, culture or religious belief.”

Lux Aeterna – Latin (to be performed by guest choir)

Hayom Kadosh – Hebrew (to be performed by guest choir)

This year’s International Eisteddfod features headliners as diverse as Gregory Porter, Manic Street Preachers, The Overtones, Sir Bryn Terfel, Kristine Opolais and Kristian Benedikt in Tosca, Reverend and The Makers and BBC Radio One’s Huw Stephens, as well as thousands of other professional and amateur performers.

For more information or to purchase tickets please click here