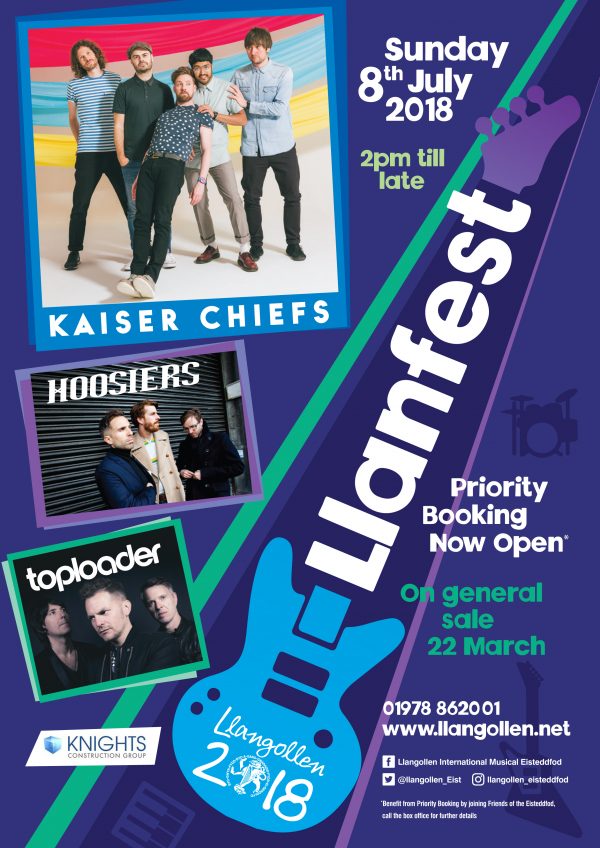 Llanfest was launched in 2011 to introduce the event to new audiences and attract festival goers from across the country. The announcement of the Kaiser Chiefs 2018 appearance follows the huge success of legendary Welsh band Manic Street Preachers, who raised the roof of the pavilion at the festival finale last year.

Tickets will go on sale to Festival Pass holders and Friends of the Eisteddfod at 9am on Wednesday 7th March 2018, with general release tickets going on sale two weeks later on Thursday 22nd March 2018.  Fans wishing to get their hands on the first tickets will able to do so by becoming a Friend of the Eisteddfod before or during the priority booking period.

The concert will see the pavilion’s rear seating once again being removed to increase capacity to more than 5,200, making it one of the festival’s biggest ever gigs.

Speaking of the announcement, Ricky Wilson, frontman of Kaiser Chiefs, said: “I’ve heard The Llangollen International Musical Eisteddfod is renowned for its diverse musical performances for promoting a message of global peace and friendship, uniting people through music – that sounds a bit of a gob full, but you can’t really argue with it. Sounds like the kind of thing the Kaiser Chiefs should be part of. So in the spirit of that we cannot wait to perform at Llanfest this summer in the international pavilion.

“There’s loads of other acts on too who I’m sure all support the ethos of global peace, friendship and uniting people etc. I know it seems like a big ask from a festival, but it’s a fun place to start.

Toploader guitarist, Dan Hipgrave, said: “We’re excited to join the fantastic line up for Llanfest 2018. The International Eisteddfod is such a musically diverse event and we’re looking forward to it.”

“Llanfest was introduced to spread this message to a wider audience, by bringing new and more contemporary music genres to the festival, while still remaining true to its traditional values.

“Kaiser Chiefs are renowned not just for their guitar-based indie hits, but also their spirit of musical adventure and re-invention, most recently with their foray into pop with Stay Together.

“Adding to that mix two iconic bands from the 2000s whose upbeat indie pop hits resonate across generations, the day is certain to bring thousands together to enjoy a high-energy finale to our 2018 festival.”

To become a Friend of the Eisteddfod and access priority booking, please telephone 01978 862001.