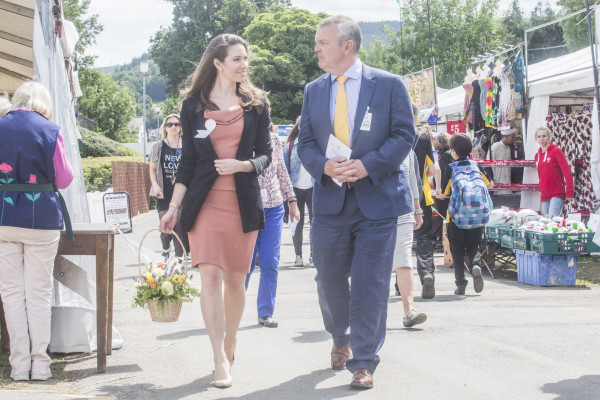 PERFORMING at eisteddfods back in her Australian homeland from the age of just five was the perfect preparation for her glittering career as one of the world’s premier saxophonists, according to Amy Dickson.
And Llangollen International Musical Eisteddfod is doing the same for top musicians of the future, according to the twice Grammy nominated star.
Amy, who has played prestigious dates across the world and has a strong of hit classical albums to her name, revealed one of the secrets of her success when she took to the stage to accept the coveted role as Day President of the Eisteddfod yesterday (Thursday).

Born in Sydney, Amy began lessons at the age of five and made her concerto debut 10 years later playing the Dubois Concerto.
She has since performed across the globe, in prestigious venues such as the Royal Albert Hall and the Sydney Opera House, as a soloist with many orchestras including the Royal Philharmonic Orchestra, London Philharmonic Orchestra, Sydney Symphony Orchestra, Melbourne Symphony Orchestra and the Vienna Chamber Orchestra.
In 2005 and 2011 she performed for the Commonwealth Heads of Government meetings in Malta and at the Perth Concert Hall in Australia.
She has also played at the Scottish Parliament in Edinburgh, St James’ Palace in London and for former Australian Prime Minister, John Howard, at Parliament House in Canberra.
Twice Grammy nominated, Amy made history by becoming the first saxophonist and the first Australian to win the 2013 MasterCard Breakthrough Artist of the Year Classic Brit Award.
Her first album, Smile, was released in 2008 to critical acclaim and her third CD, Dusk & Dawn, won her the 2013 MasterCard Breakthrough Artist of the Year Classic Brit Award and reached number one in the UK classical charts.
Amy is an Ambassador of the Australian Children’s Music Foundation, the Prince’s Trust, the Prince’s Foundation for Children & the Arts.
Since arriving in the UK, where she is now based, Amy has spearheaded something of a classical saxophone revival thanks to her unique take on the genre and her distinctive approach to the instrument.
This year she has been touring internationally with stops back home in London for brief appearances on TV including performances on BBC Breakfast and The One Show.
Speaking from the Eisteddfod stage, Amy said she was “enormously pleased” to be chosen as Day President.
She explained: “I’ve been hearing about the Llangollen Eisteddford for many years and delighted to be here at last.
“My mother arranged for me to have music lessons from when I was two years old as she thought I was a little un-coordinated.
“I performed many times at the local eisteddfods which towns around the Sydney area used to have.
“I remember my first performance at the age of five. My mother made me a red velvet dress with a white lace collar which I wore on stage.
“My performances at those eisteddfods were the perfect prepartion for my professional career.
“One of the things they taught me was how to be comfortable on stage. After my own performances I used to sit in the back of the auditorium and watch older children on stage and wondered if I would be able to play as well as them one day.”
Amy added: “A community spirit surrounds events such as Llangollen Eisteddfod and they also give you a great sense of purpose as a musician, which is not just a career but a vocation.
“I think I knew from an early age that I had a God-given talent to play music and I love being on stage with my saxophone.
“I hope that many others get to experience what I have experienced as a musician and events such as Llangollen play an enormous role in making that possible.”
Eisteddfod Vice-chaireman Rhys Davies, who also plays the saxophone, said: “As a fellow saxophonist I am delighted Amy has accepted our invitation to be day president and to have given such a positive message about the Eisteddfod.
“It is particularly appropriate as the first winner of our Young Musician prize was a young saxophonist, Gemma Blair, from the Wirral,