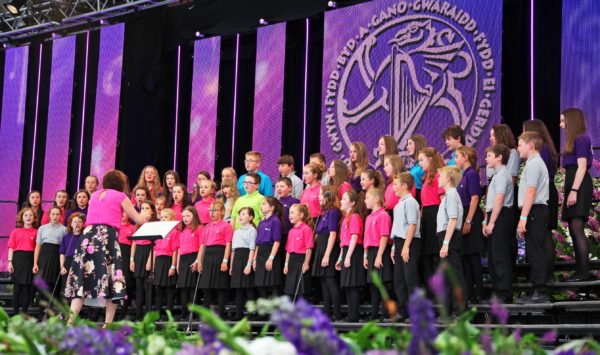 A 94-year-old retired teacher from Bristol took centre stage at a world famous music festival when she presented a trophy in memory of her brother to a champion choir.

It was a homecoming for Enid Evans at the Llangollen International Musical Eisteddfod in Denbighshire – the Welsh-speaker from Llanrhaeadr yng Nghinmeirch, near Denbigh, in the Vale of Clwyd, sang at the very first Eisteddfod in 1947.

This was the 70th time the festival has been held and in that time it has attracted artists of the calibre of Luciano Pavarotti, who competed there as an unknown 19-year-old in 1955 as a member of the Chorus Rossini from Modena

It was founded to promote peace and harmony in the aftermath of the Second World War and still attracts up to 4,000 competitors, over 1,000 from overseas, and up to 40,000 visitors every year.

This year’s six-day festival featured concerts by the great Welsh bass-baritone Bryn Terfel and keyboard maestro Jools Holland but Enid, who lives in Longwell Green, Bristol, was there to present the Junior Children’s Choir of the World trophy.

She had donated trophy and a cheque for £500 in memory of her late brother and fittingly it was a North Wales choir which came out on top as Cor Ieuenctid Mon, Anglesey Youth Choir, took the top prize after a tough competition involving eight choirs from across England and Wales.

The choir’s musical director and conductor Mari Lloyd Pritchard wept tears of joy as she collected the international trophy and a cheque for £500 from Enid in memory of her brother, H Wyn Davies MBE and his wife Muriel.

d has missed only rarely missed the festival over the last 70 years. She sang at the very first Llangollen Eisteddfod and despite living in Bristol for the last 60 years she always heads for Llangollen every July if she possibly can.

She said: “I always enjoy attending the Eisteddfod and look forward to hearing the children’s choirs in particular.

“This year was an excellent competition and Cor Ieuenctid Mon were worthy winners.

“I sponsor the prize as my beloved brother, H Wyn Davies, and his wife Muriel, were faithful supporters of the Eisteddfod for many years.”

Royal composer Paul Mealor, who was one of the adjudicators, praised Cor Ieuenctid Mon’s performance.

He said: “It was a really tough competition with some fantastic children’s choirs competing. However, Cor Ieuenctid Mon stood out due to their energy and good diction. The music and singing came from deep in their souls.”

Enid added: “I was fortunate to be brought up in a very musical family and I was present at the very first event in 1947, together with my parents and brothers.

“I have attended annually since then and have many memories of special people and performances which I shall always treasure.”