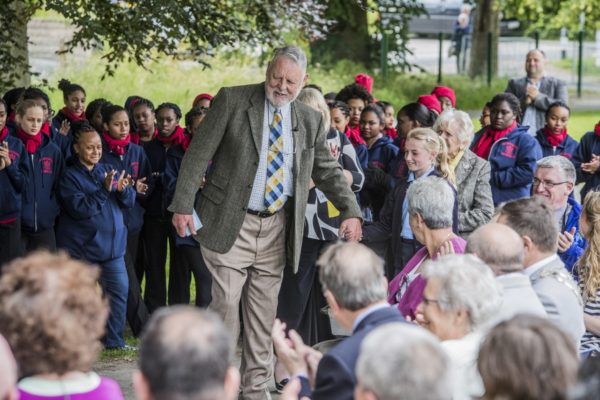 On the first day of the historic 70th Llangollen International Musical Eisteddfod, its President, legendary peace campaigner Terry Waite, unveiled a plaque on the field where the first festival was held.

Intended to help heal the scars of World War Two which had ended only two years earlier, that 1947 Eisteddfod was staged on what is now the playing field of Llangollen’s Ysgol Dinas Bran.

It continued to be held there for the next decade until the annual summer festival moved into the futuristic new International Pavilion specially built at nearby Penddol.

To mark the 70th festival, which runs all this week until Sunday, a commemorative plaque was unveiled on the former site by Mr Waite.

In the true spirit of international understanding for which the Eisteddfod is famous, he was helped by the Albanian peace ambassador, Fitim Mimari who was paying a special visit to the festival.

And in a surprise salute to the close links with Ysgol Dinas Bran, Mr Waite called on one of its youngest pupils to also lend a hand in drawing aside the Welsh national flag from the new plaque.

The handsome piece of Welsh slate bearing the inscription was specially donated by the Llechwedd Caverns in Blaenau Ffestiniog and stands on a plinth of Rhosymedre sandstone which once formed part of the walls of Llangollen’s recently demolished Cottage Hospital and was donated jointly by the companies Cynfen of Denbigh and K&C Construction of Kinmel Bay, who are building social housing on the site.

As the plaque project received financial assistance from Llangollen Town Council, local Mayor Mike Adams was amongst the large gathering of VIPs who watched the ceremony alongside hundreds of flag-waving children from Ysgol Dinas Bran and the town’s two primary schools, Ygsol Y Gwernant and Ysgol Bryn Collen.

Eisteddfod chairman, Dr Rhys Davies, said: “The idea of today’s ceremony is not only to commemorate the fact that the first Llangollen International Musical Eisteddfod was held here on this field but also to raise awareness of the significance of this site, especially for the pupils of the Ysgol Dinas Bran who will pass this plaque twice a day on their way to their school buses.” 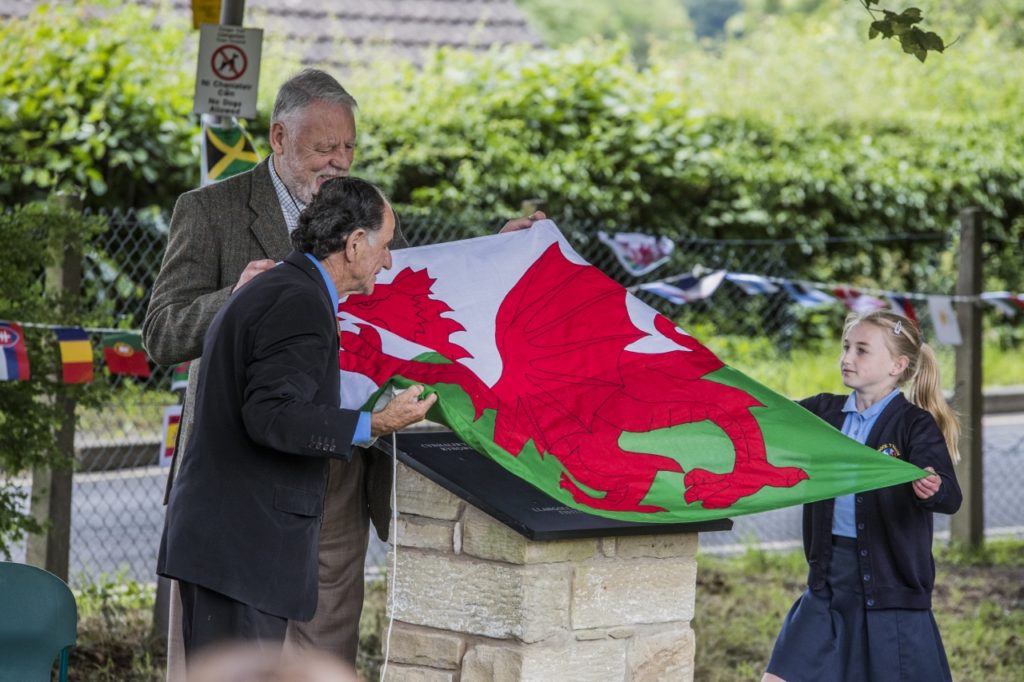 Llangollen International Musical Eisteddfod 2016. Terry Waite is pictured with guests and pupils from Dinas Bran High school unveiling a plaque to mark the site where the Eisteddfod first took place in 1947.

The unveiling ceremony began with a rousing fanfare from the school’s own brass ensemble and there was more music from the girls of the Bishop Anstey High School Choir from Port of Spain in Trinidad who sang two numbers as a prelude to their appearances in the Eisteddfod’s musical competitions later in the week.

Before unveiling the plaque, Terry Waite, who spent four years as a hostage at the hands of a Middle Eastern terrorist group, said: “This year we have been remembering World War One and the Battle of the Somme, in which almost 20,000 British and Commonwealth soldiers died in just one day.

“Such is the cost of warfare but today wars continue to destroy lives, property and peace.

“Some might say we are now involved in a third world war but of a different kind where terrorist acts can break out in any part of the world causing tremendous havoc to the people whose lives are affected by them.

“At this ceremony we remember the people of Llangollen who, following World War Two, were determined to use what gifts they had to promote peace and understanding amongst people of different cultures and religions.

“Over the years music has brought people together and had a profound affect way beyond the boundaries of Llangollen.”

He added: “My message to the young people here is to believe in peace and not to believe there is nothing you can do to achieve it.

“The people from this relatively small area of Wales have had an impact around the world.”

Mr Waite sought out one of the youngest of the watching schoolchildren and invited her to join him in the unveiling.

The girl he chose, 11-year-old Alyssa Nash, from Chirk, who is in year six at Ysgol Dinas Bran, said later: “I was shocked that he picked me out of all the others. 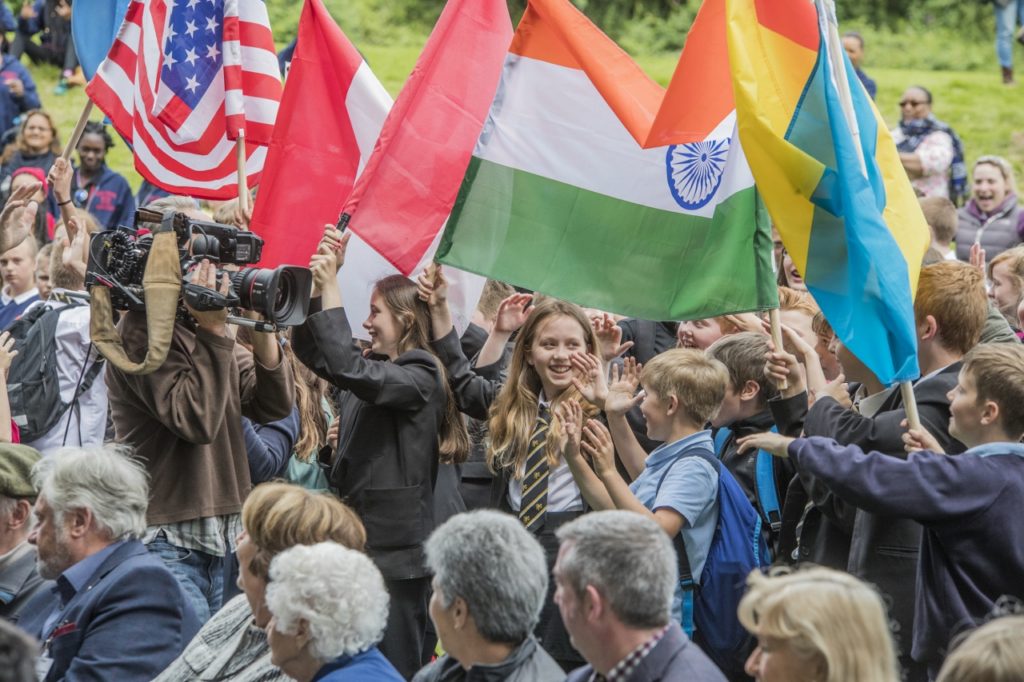 Llangollen International Musical Eisteddfod 2016. Terry Waite is pictured with guests and pupils from Dinas Bran High school unveiling a plaque to mark the site where the Eisteddfod first took place in 1947.

“It was a bit scary being called out in front of everyone but it was something I’ll never forget.”

Among the watching crowd was 84-year-old Les Potts from Llangollen who was at the first Eisteddfod in 1947 as a young volunteer.

He said: “It was fantastic to see the plaque unveiled.

“At that first Eisteddfod I was here with my father, Robert, who was also one of the first volunteers.

“I was acting as a sort of goffer, carrying messages around the field as there weren’t any telephones back then.

“I also worked on the outer gate. We were using a rubber stamp to mark the arms of people who were coming in and out. That was until some the ladies complained that the ink was coming off on their dresses and we had to start issuing them with cloakroom tickets instead.”

Also there was Mavis Evans, from Llangollen, as a 15-year-old schoolgirl at the 1947 Eisteddfod who hasn’t missed one since. She said: “It was so exciting then to see the coaches and charabancs arriving and the trains packed with singers and dancers.

“I’ve always lived in Llangollen so I’ve always been involved and my father was actually a guarantor for the first Eisteddfod in case it failed but thankfully it didn’t and it’s gone from strength to strength.

“It was much smaller then but it was just as exciting and we’re still as enthusiastic. My family grew up with it and have all been volunteers and I still get my tickets every year.

“I still remember the first Eisteddfod and an Austrian choir singing The Blue Danube and after that I remember the German children’s choir and The Happy Wanderer and Dylan Thomas calling them ‘angels with pigtails’.”