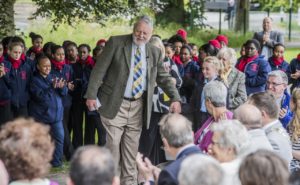 On the first day of the historic 70th Llangollen International Musical Eisteddfod, its President, legendary peace campaigner Terry Waite, unveiled a plaque on the field where the first festival was held.

Intended to help heal the scars of World War Two which had ended only two years earlier, that 1947 Eisteddfod was staged on what is now the playing field of Llangollen’s Ysgol Dinas Bran. END_OF_DOCUMENT_TOKEN_TO_BE_REPLACED