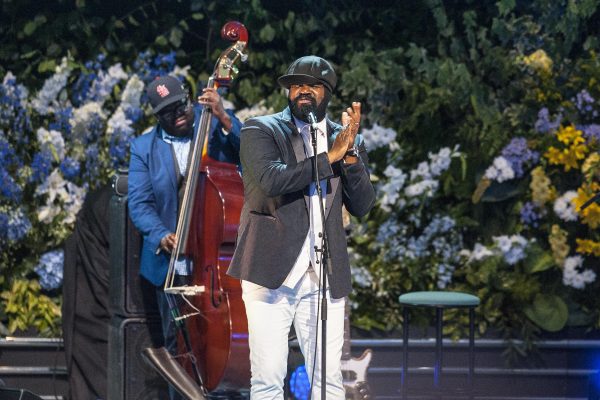 Jazz, blues and soul singer, Gregory Porter piled praise on the International Eisteddfod during his stunning performance on Friday 7th July, thanking it for its commitment to bringing together people in the spirit of love and peace and supporting the survival of folk music.

Speaking from the stage of the Royal International Pavilion, Porter related two of his great hits to the ethos behind the annual festival: “There’s good vibes here,” he said.

“Liquid Spirit is the release of love, spirit, music. That’s what that is and that’s what this [the International Eisteddfod] is,” he said. “Musical Genocide is all parts of the world coming together, folk music being cultivated, survived in a way. That’s what you do, so thank you for that.”

Audiences at the Llangollen Eisteddfod were treated to a unique blend of jazz, soul and gospel from Porter and his exceptional band, comprising Albert ‘Chip’ Crawford on Piano, Jahmal Nichols on Bass, Emanuel Harrold on Drums, Tiuon Pennicott on Sax, Chris Sturr on Trumpet and Ondre J Pivec on Hammond B3.

Gentle, charming and – above all – smooth Porter endeared himself to the audience with feigned attempts at struggling to pronounce ‘Llangollen’.

He said: “It’s wonderful to be in this beautiful place… and before the end of the night I’ll know how to pronounce its name.”

Before the end of the night, however, he was slipping the name of the venue for the spectacular show effortlessly into his lyrics

The largely improvised set featured favourites including Musical Genocide, On the Way to Harlem and a stunning rendition of Take Me to the Alley, a song inspired by Porter’s late mother, Ruth, who would take a young Porter through the streets looking for people in need to help.

Throughout the show Porter made reference to his mother’s presence in his music, not least during the singer’s stripped-back rendition of Nat King Cole’s I Love You (for Sentimental Reasons), performed with just a seated Porter and pianist Albert ‘Chip’ Crawford.

Porter explained: “When Nat King Cole sings, my mother comes to me through the music.”

Porter’s set also featured a series of unique renditions of classics such as Papa Was A Rolling Stone and Nature Boy, which captivated audiences.

Taking the audience on an emotional journey, Porter and his band brought the audience to its feet, clapping and dancing in the aisles during their encore, at the end of which each musician played out, showcasing their undeniable individual skills that supported Porter’s powerful, soulful performance.

Speaking after the show, Porter, shared his thoughts on Llangollen and the International Eisteddfod: “My first visit to North Wales has been great, I’ve already said I’m putting it on a list of places I want to come back to,” he said. “I caught part of the Llangollen town parade as it was going through and it was just full of colour which was dope.”

Once again praising the festival, which was created to help heal the wounds of war after World War II in 1947, for using music to unite people of all cultures and backgrounds, Porter also spoke on the healing power of music: “I always come back to personal experience and I’ve used music as a healing tool, to soothe myself. My mother said I used to sing myself to sleep. It’s the charge of musicians to really capture that power of music.”

On the Way to Harlem

Take me to the Alley

Papa was a Rolling Stone

Don’t be a Fool

I Love You (For Sentimental Reasons)

To purchase tickets for the Llangollen International Eisteddfod or for more information, click here.