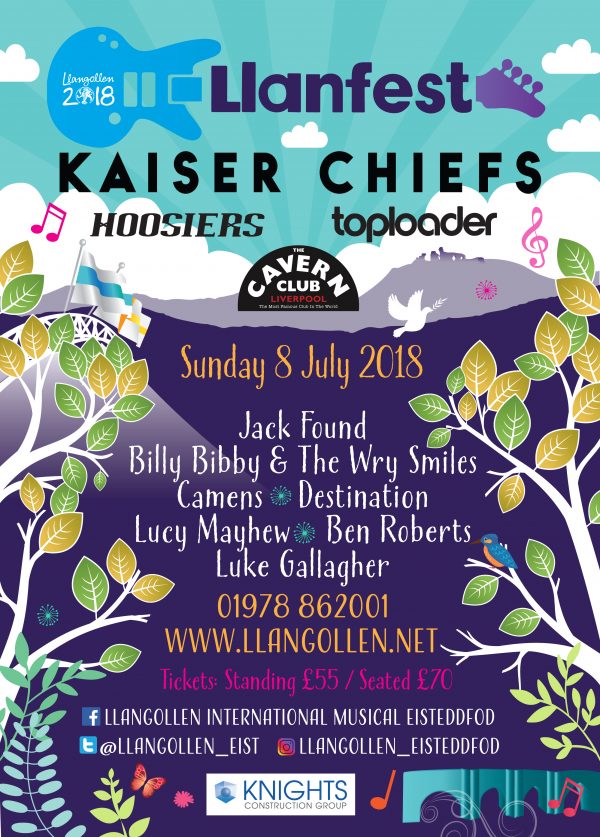 Llanfest is fast becoming a ‘music Mecca’ to see emerging bands on the outside stages during the day before the headliners take to the main stage in the evening. This year festival-goers will be able to enjoy three outdoor stages, jam-packed with rock, pop and indie music.

The Cavern Club Liverpool– The world’s most famous music club will host its first ever pop up stage at Llanfest, with a myriad of performances by their world-class resident musicians covering the countless artists that have graced The Cavern Club stage over the years.

Jack Found – said to have developed a unique style that combines bright energy and a remarkable voice, Jack is set to release his debut album which demonstrates his distinctive sound. His debut single, “Sundown” received extensive radio play and was featured on Good Morning Television since its release in 2017.

Billy Bibby and The Wry Smiles – a sensational four-piece alternative rock ensemble from North Wales and Chester. Since playing their first full band gig in November of 2015, the band have tallied well over 100 gigs and festivals in 50+ UK cities, and released a début EP and four singles.

Camens – a four piece indie/alternative rock band from Staffordshire have recently been spotted by BBC6 Music and will be performing their latest singles, including the popular “Boys will Stray”.

Ben Roberts – the folk/rock singer based in London started writing music as a teenager, taking influence from his love of classic soul, rock and R&B. As a result, Ben’s songs have a timeless feel to them. Having recorded two live sessions for BBC Introducing, Ben supported Newton Faulkner on his UK tour in 2016 and since supported Gabrielle Aplin.

Luke Gallagher – Wrexham-based singer/songwriter returns to play at this year’s Llanfest with his nostalgic blend of Mod/60s/90s tunes, Gallagher has mesmerized crowds of all ages with his unique singing talent. His third album is released this year.

The International Eisteddfod has been promoting peace and goodwill through music and performance for over 70 years in the beautiful town of Llangollen, offering multi-cultural acts a fantastic platform to showcase their talent. As one of the most musically diverse festivals in the world, Llangollen Eisteddfod welcomes more than 4,000 performers and up to 50,000 visitors with Llanfest marking the end to a week-long event.

“This year we’re yet again introducing new audiences to contemporary genres of music, perfectly combining the festival’s culture and heritage with ground-breaking modern talent to create the ultimate finale. We look forward to continuing to showcase a wider musical offering to expand upon our current audience.

“We’re delighted to announce such a show-stopping line-up for Llanfest’s outdoor stages. We are a truly global festival and it is wonderful to offer local talent the opportunity to perform on our worldwide stage. Most artists are based in Wales or the surrounding areas of Staffordshire, Merseyside and Cheshire and that is testament to the musical talent on our doorstep.

“It brings us so much pride to be able to bring this calibre of local talent together with world-class music legends to mark the end of a phenomenal week of extraordinary events”.

Tickets for Llanfest are available here.