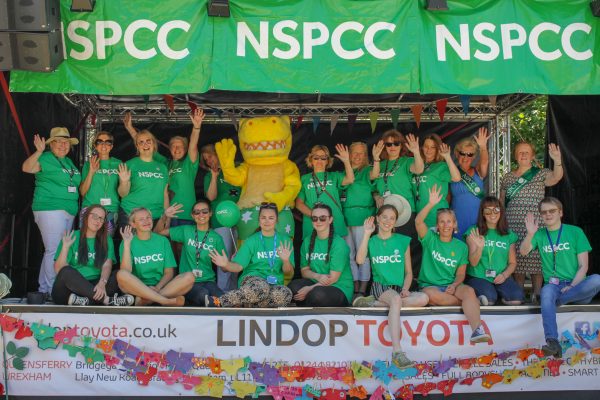 Hundreds of schoolchildren have seen a musical performance with a difference at the Llangollen International Musical Eisteddfod while learning how to keep themselves safe.

The NSPCC’s dinosaur mascot Pantosaurus appeared on the main stage on Tuesday (3 July) to promote the leading children’s charity’s ‘PANTS’ campaign to children from around 45 schools.

The campaign has helped more than 400,000 parents across the UK talk to their children about sexual abuse since it launched four years ago. Talking PANTS is designed to teach children that their body belongs to them, they have the right to say no and to tell someone they trust if they’re ever worried about anything.

The PANTS acronym stands for:

A – Always remember your body belongs to you

T – Talk about secrets that upset you

S – Speak up, someone can help

Pantosaurus appears in a catchy animation made by Aardman – creators of Morph, Wallace & Gromit and Shaun the Sheep – available in both Welsh and English on the NSPCC website where resources for parents can also be viewed and downloaded.

The loveable dinosaur performed on the World Stage at the Llangollen International Musical Eisteddfod on Tuesday to perform the ‘PANTS’ song to many of the estimated 2,700 children who attended on the festival’s Children’s Day which this year was sponsored by NSPCC Cymru.

Children’s Day is the customary opening of the Llangollen International Music Eisteddfod and hosts a day of fun-filled activities for young minds, including the annual Peace Message which, this year, marks the centenary since the end of World War One.

As well as performing and teaching the PANTS song on stage, the NSPCC also carried out PANTS-related activity workshops including creating a washing line across the stage of pants made by children. A group of childcare students from Coleg Cambria helped run the activities. The North Wales college has adopted NSPCC Cymru as their charity of the year for 2017- 2018.

Alan Peterson, Chair of the NSPCC’s Wales Appeal Board, said:

“It’s vital that our children understand how to stay safe. It’s even better if they can have fun while learning.

“We are grateful to the Llangollen International Musical Eisteddfod for giving us the opportunity to perform to so many children from the main stage on the festival’s children’s day, sponsored by NSPCC Cymru.

“The NSPCC created the PANTS campaign to make discussing this difficult subject less daunting and uncomfortable to reach as many families as possible. The charity is continuing to develop new ways for Pantosaurus to help young children learn how to stay safe from abuse.”

“We were thrilled to welcome Pantosaurus to Llangollen for Children’s Day on Tuesday 3rd July. As well as offering youngsters a fun workshop session, the NSPCC campaign is also a fantastic opportunity to educate youngsters about the dangers of sexual abuse.

“The International Eisteddfod promotes speaking out about important issues such as this, as well as helping young children in our society to lead safer lives.”

The importance of the PANTS campaign has been reinforced by research by the NSPCC has revealed that as many as one in every 20 UK schoolchildren will suffer some form of sexual abuse.

And a recent YouGov survey, commissioned by the NSPCC, showed that 92% of parents of children aged four to eight thought that it was important to speak to their sons or daughters about sexual abuse.

As well as talking PANTS to hundreds of children on the opening day of the Musical Eisteddfod, NSPCC Cymru will also be at the festival’s Harmony Centre on Saturday (7 July) for Family Day where the charity will be distributing PANTS parent guides and activity packs.

The Llangollen International Musical Eisteddfod takes place every year during the first week of July in the beautiful town of Llangollen, North Wales.  It offers six days of the very best in global music and folk dance in a unique combination of competition, performance and international peace and friendship. This year, the star-studded concert line-up features performances from Kaiser Chiefs, Van Morrison and Alfie Boe.