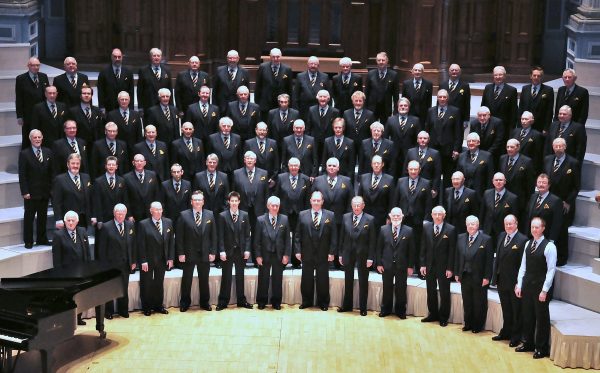 A male voice choir that performed at the first ever International Eisteddfod in 1947 will sing alongside two of Wales’ most prolific male voice choirs at the event’s landmark 70th Anniversary opening concert on Monday 3rd July.

Performing powerful operatic choruses, inspiring classical favourites and some of Wales’ best known hymns, including Myfanwy and Soldiers Chorus, the show, which is jointly sponsored by Denbighshire County Council and Hamper Llangollen, will be a spectacular celebration of brass and voices, setting the tone for the week-long 70th Anniversary festival.

The Fron Male Voice Choir, like the Eisteddfod, celebrates its 70th anniversary this year. Formed in 1947, inspired by the inaugural International Eisteddfod, its history perfectly reflects that of the festival with many of its members coming together after returning from war. Remarkably, two of its original members still sing with the Fron today.

Joining the Fron is Rhos Male Voice Choir, one of the most successful in Wales and 2015 winners of the male voice choir section at the International Eisteddfod. The acclaimed choir has also enjoyed a unique hat trick of wins when it took first place in the male voice choir competitions in The Llangollen Eisteddfod, the National Eisteddfod and S4C’s Côr Cymru in 2013. The choir also dedicates significant time and effort to fundraising, raising thousands of pound each year for local and national charities.

Linking the show back to the very first Eisteddfod, Colne Valley was the first male voice choir to take the stage at the 1947 event and they are one of the festival’s most prolific competitors. The choir boasts six wins – including a hat trick in 1960, 1961 and 1962 – five second and two third prizes, in 23 competitive visits.

Canoldir, a Birmingham-based male choir that was formed on St David’s Day in 1966 by a group of Welsh exiles and some English friends, completes the opening concert’s exceptional male voice line-up.

The opening night performance will blend the iconic festival’s past, present and future, with the traditional male voice choirs sharing the stage with globally renowned performers Cory Brass Band and David Childs, and young talent Meinir Wyn Roberts, who was propelled to fame following her 2015 Voice of the Future win.

The impressive line up will perform under the leadership of prolific conductor Owain Arwel Hughes CBE, who has conducted and recorded with many of the world’s leading orchestras, including the Philharmonia Orchestra, the Royal Philharmonic Orchestra in London, the BBC National Orchestra of Wales and the Aalborg Symphony Orchestra in Denmark.

Proud of his Welsh heritage and the country’s reputation as a ‘Land of Song’, Owain is also committed to forging a future for young Welsh musicians. His passion led him to the position of Music Director of the National Youth Orchestra of Wales, the first orchestra of its kind in the world.

Owain was awarded the OBE in recognition of his services to music and charitable work, and further honoured in January 2009 when he received the CBE.

Eilir Owen Griffiths, Music Director of the International Eisteddfod, said: “The line up for our Monday night opening concert is simply phenomenal and perfectly combines the Eisteddfod’s history and heritage with world class musical talent.

“It also highlights the opportunity that the festival’s competitions provide for young talent, with Meinir Wyn Roberts, winner of the 2015 Voice of the Future competition graduating from competitor to headliner in just two years.

“What’s more we have the honour of welcoming a choir which competed in the inaugural Eisteddfod to perform at the 70th Anniversary opening concert.

“Combine all this with the talents of the Cory Brass Band and David Childs, who is widely regarded as one of the greatest brass talents of his generation, all under the leadership of Owain Arwel Hughes CBE and we certainly have a spectacular opening set for our 2017 festival.”

Dr Mohammed Mehmet, Chief Executive of Denbighshire County Council, added: “Once again the International Eisteddfod has curated a glittering line up for its opening concert. The concert will showcase world-class Welsh musical talent and we can’t wait for the performance. We are delighted to be one of the Eisteddfod’s sponsors again this year.”

Bob Jaques, volunteer on the organising committee, from opening concert co-sponsor, Hamper Llangollen, added: “What a fitting start to the International Eisteddfod’s 70th Anniversary concert schedule. We are looking forward to an evening of rousing classical music and powerful Welsh hymns to get us in the mood for the rest of the week!”

The Monday night concert marks the start of a week of music, dance, celebration and family fun, with performances from artists as diverse as Sir Bryn Terfel, Kristine Opolais and Kristian Benedikt in Tosca, Gregory Porter, The Overtones, Christopher Tin and the Llangollen Celebration Chorus, Manic Street Preachers, Reverend and The Makers and BBC Radio 1 DJ, Huw Stephens.

For more information or to purchase tickets for the 70th anniversary Llangollen International Musical Eisteddfod, including Llanfest, please click here.