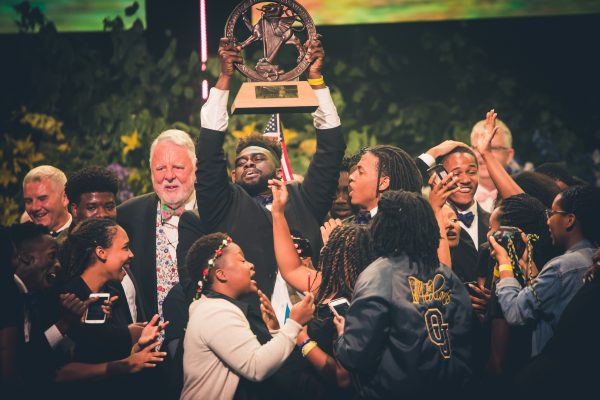 After a thrilling final, The Aeolians of Oakwood University from the USA were named Choir of the World, while Northern Irish dance group, Loughgiel Folk Dancers were crowned Dance Champions of the World.

Loughgiel’s supporters were in great voice as the dance group spilled onto the stage to collect the Lucille Armstrong Trophy in a sea of happy tears and red frocks.

But the pavilion erupted as the US choir was announced as Choir of the World 2017 by the International Eisteddfod music director, Eilir Owen Griffiths.

The singers bolted across the pavilion from their seats and stormed the stage, holding American flags aloft and posing for selfies with the Pavarotti Trophy and their esteemed conductor Max Johnson Ferdinand, who had just been awarded the Outstanding Conductor Award.

The evening concert, which was sponsored by GHP Legal, saw the very best of international choral and dance talent battle it out on the stage of the Royal International Pavilion for the prestigious awards and also featured special appearances from The Overtones.

The UK’s number one vocal harmony group, The Overtones, opened the show, setting the upbeat tone for the evening. Performing a range of much-loved classics including Pretty Woman, Let’s Stay Together and How Sweet It Is, the charming quintet had the audience swaying in their seats.

Suitably warmed up for the main event, spectators were the treated to exceptional performances by the winners of each of the choral group categories, from the mixed category CYWAIR (Wales), from the female category Grupo Vocal “AmitiÃ©” (Spain), from the Open category, Cor Glanaethwy (Wales), from the male Men in Blaque (USA) and from the youth category, The Aeolians of Oakwood University.

After a short interval the three highest scoring groups from the dance categories took to the stage to perform for the chance to lift the coveted Lucille Armstrong Trophy.

The competition opened with a cheerful traditional performance from Scotland’s Corryvrechan, before the Gabhru Panjab De Bhangra Dancers from India took over the stage in a riot of colour and noise, performing a dance connected to harvest time. But it was Loughgiel Folk Dancers who stole the show, with a flawless routine that reflected a beating heart and the blood coursing through the body.

Already two-time winners of the Dance Champions of the World title (2014, 2015), the troupe also made International Eisteddfod history earlier in the week during the Open Floor Dance category, scoring the first ever perfect score of 100/100 that the competition has ever seen.

Resplendent in sparkling dinner jackets, The Overtones returned to the stage while adjudicators considered the eight world-class performances. After praising the talent of the groups that had performed the five admitted they’d ‘never been to a festival quite like this one’, before teasing the crowd that they had been ‘spectators for long enough’ encouraging a joyful sing-a-long of Frankie Valli’s Can’t Take My Eyes Off You.

Following the presentations the concert concluded, as is traditional, with the pavilion joining hands to sing Auld Lang Syne, bringing the International Eisteddfod’s 70th anniversary competitions to a close.

Speaking after the competition, which was his last as music director of the International Eisteddfod, Eilir Owen Griffiths, said: “What a competition and what an evening! The adjudicators had an unenviable task of selecting the winners, as the choral competitors were simply world class.

“The dance finalists were no less than spectacular. I was in awe of the colour, energy, discipline and interpretation, it’s group’s movements told a story that captivated the audience.

“It was quite emotional watching each of the performances, all that commitment, spirit and passion, the months of hard work that has gone into preparing for the International Eisteddfod, it really does take your breath away – but I’d never expect anything less from Llangollen’s competitors.”

To purchase tickets for the Llangollen International Musical Eisteddfod or for more information, click here.