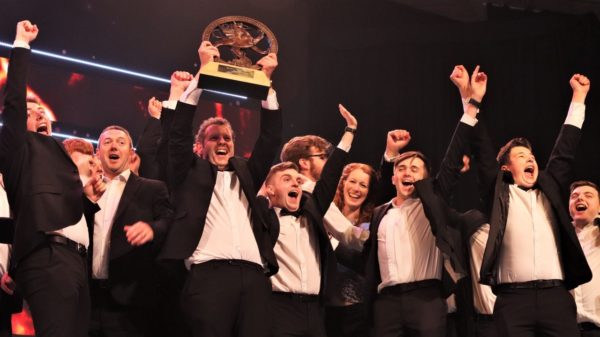 The dance troupe and supporters were ecstatic as they were handed the title, then the whole pavilion erupted to rejoice with the local singers as they leapt to the stage to collect the Pavarotti Trophy, cheering loudly in a celebration that was joined by audience and competitors alike.  This is only the third time a Welsh choir has won the coveted title.

Aled Phillips from the choir, said: “After months of practice, we’re absolutely delighted to accept this prestigious award.  It was a truly unforgettable experience to be able to perform in such an iconic venue alongside world-class talent.”

“We have absolutely loved our time in Llangollen, both performing on an International stage and having the chance to meet such inspirational individuals from across the globe. The atmosphere of the International Eisteddfod is indescribable; to be surrounded by peace, friendship and goodwill is an experience we will never forget.

“We are filled with pride and joy to be returning home with not one but two trophies!’

During the awards ceremony, esteemed conductor Mr Ramon Lijauco, Jr, from Bangkok, was also presented with the Gwobr Jayne Davies Prize for the most outstanding conductor, whom each year is chosen from all of the choirs competing in the Choir of the World final.

Internationally renowned Welsh harpist and former composer to H.R.H The Prince of Wales, the Vice President of the Eisteddfod, Catrin Finch is one of the most accomplished and versatile harpists of her generation and performed on the pavilion stage as part of the evening’s entertainment.

As a worldwide performer, renowned for her majestic and soothing sounds, Catrin’s appearance delighted the audience of the Royal Pavilion with a cascading performance of classical music, as the week of intense competitions drew to a close.

Following the presentations the concert concluded, as is traditional, with the Pavilion joining hands to sing Auld Lang Syne, bringing the Llangollen International Musical Eisteddfod 2019 competitions to a close.

Speaking after the competition, his first as Music Director of the International Eisteddfod, Edward-Rhys Harry, said: “What a breathtaking competition and inspirational evening from our choral competitors.

“After witnessing such world class performances that left our audience completely stunned, it was clear that the adjudicators really did have a tough decision on their hands in selecting the winners.

“It was incredibly emotional to see the result of months of hard work and preparation unfolding on the Royal Pavilion stage. It was most certainly a tough call, the winners just had the edge over their competitors, displaying emotion and passion in every note and movement.”

Edward continued: “I’d like to thank all of the groups involved in this prestigious competition for their exceptional contribution to this year’s festival and congratulate our winners on their victory.

“The International Eisteddfod attracts globally acclaimed choirs to Llangollen every year, and this year was no different. The performances from Johns’ Boys Choir were truly captivating!”