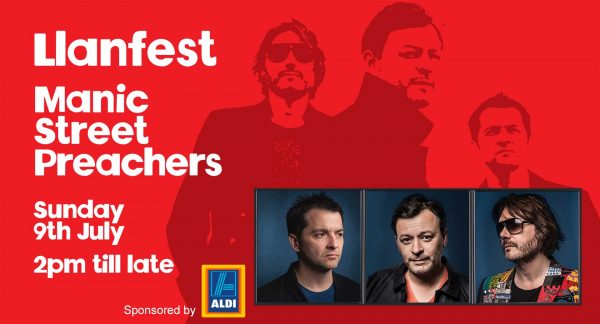 Fresh from the phenomenal success of the 20th anniversary tour of their fourth album ‘Everything Must Go’, Manic Street Preachers have announced an appearance at the Llangollen International Musical Eisteddfod in 2017, the event’s 70th anniversary year.

The multi-award winning trio will play tracks from their extensive back catalogue at the show, which will be the band’s first ever appearance in Llangollen. Sponsored by Aldi, the gig will be the biggest ever show that Llanfest – the final day of the annual week long festival – has played host to, with the pavilion’s rear seating being removed to take capacity in excess of 5,200.

Tickets for the show at the Royal International Pavilion in Llangollen will go on sale at 9am on Thursday 1st December 2016.

The festival’s musical director, Eilir Owen Griffiths, said: “This is set to be Llanfest’s biggest ever show and to say we are excited about the prospect would be an understatement.

“The Manics are one of the most important bands to ever emerge from Wales. They have an extensive back catalogue of politically charged songs, which resonate as much now as when first released, as well as their powerful newer works.

“The Llangollen International Musical Eisteddfod is a celebration of Wales and the world, so to be joined by the Manics – who have themselves have enjoyed success and recognition on a global scale – as we celebrate our 70th anniversary is fantastic and a real honour.

“It will be a truly unforgettable conclusion to our 2017 festival and we are all eagerly anticipating the set that Manic Street Preachers will play on the evening.”

Speaking of the announcement of the show, Manic Street Preachers said: “It’s always really special for us to play in Wales, particularly when we are playing an event for the first time. And to play on the festival’s 70th anniversary will make it even better.”

A spokesperson for Aldi said: “Aldi is delighted to sponsor Llanfest 2017, especially for this landmark 70th anniversary event. With a new store opening in the town soon, we believe 2017 will be a great year for us locally and look forward to building even more great partnerships in the area.”

Manic Street Preachers will appear at the Llangollen International Musical Eisteddfod on Sunday 9th July 2017.  There will be live performances from a range of artists from 2pm on the outside stages and support acts will run from 7pm in the pavilion, before Manic Street Preachers take to the stage.