Band Nantagrw is a lively young band of talented musicians who enjoy performing traditional Welsh melodies in a contemporary manner, together with exciting clogdancing and singing. They also accompany Dawnswyr Nantgarw. They won 1st prize in this year’s National Eisteddfod. 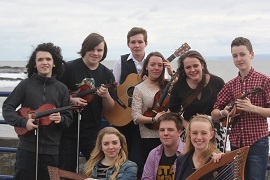 Founded in the early 1930s, the Burton Accordion Group plays even after more than 70 years their piano and bass accordions with the same passion. The six members of the group which are lead by Christine Young have won the National Accordion Organisation of the United Kingdom in the Art Level Group section on six occasions.Over and above that the Burton Accordion Group engage voluntarily and plays for various fund organisations. 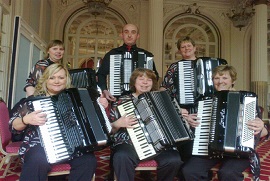 Derby Grammar School Swing Band was formed in 2004 and plays now a variety of genres including jazz, funk, pop and rock by artists as diverse as Michael Bublé, Weather Report, Norah Jones and Taio Cruz. They have played at Derby Assembly Rooms, Derby Cathedral, taken part in the National Festival of Music for Youth, completed a tour of Belgium and performed at the 2015 Llangollen International Eisteddfod, achieving 2nd place in the instrumental ensemble category. The swing band has also recorded a CD which is available from many outlets in Derbyshire.

Kiltearn Fiddlers is an award winning performance group based in Evanton. Alpha Munro founded the group in 1990 to provide additional opportunities for this group, to build their confidence and confidence. Over the past 25 years hundreds of children have benefited. They play for Festivals, ceilidhs, charity events both here and abroad. They have won trophies at Festivals and have made 4 CDs. The current group is made up both fiddlers who attended Llangollen last year and new advanced players. 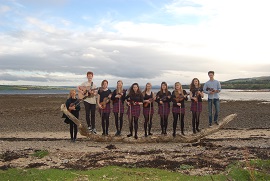