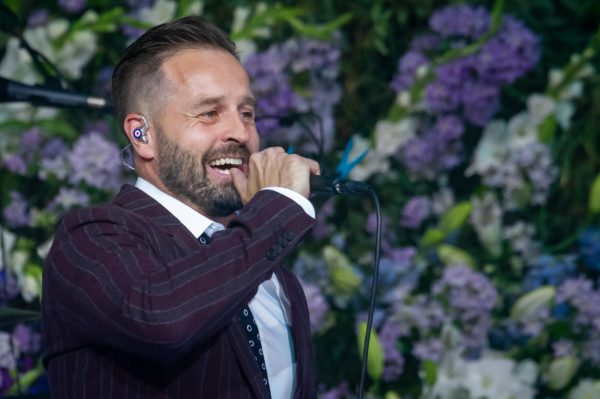 Dubbed ‘Britain’s favourite tenor’ the hugely successful recording artist, West End and Broadway sensation was joined by his ensemble of stellar musicians, as he showcased some of his new and best loved songs to a full house.

Boe opened the show with a storming rendition of ‘Sing, Sing, Sing’ from his new album followed by ‘Pencil Full of Lead’.

No stranger to the annual festival of song, dance and peace, Boe’s fourth appearance at the International Eisteddfod since 2008 was as warmly received as his past concerts. His most recent visit was in 2015 when he starred in an evening celebrating musical theatre and movie themes.

The award-winning vocalist captivated his audience throughout the evening with his easy charm and intoxicating charisma in between songs he even kept track of the football score!

The atmosphere was electric as Boe guided his entranced audience through an emotional musical journey, bringing the audience to its feet as he belted out powerful renditions of ‘Bring Him Home’ from Les Miserables.

After a rousing three hour show, Boe brought the show to a close with a breath-taking performance of ‘Light Up’.

A smiling Boe was rewarded by a thunderous standing ovation from the crowd, proving that his appeal to International Eisteddfod audiences is showing no signs of availing.

Speaking following the performance at the Royal International Pavilion, Alfie Boe said: “The atmosphere in Llangollen was truly magical. Performing live is something I really love and look forward to no matter where I am, but International Eisteddfod is really special.

“The combination of its location and the joyful mood as people from all over the world come together to celebrate music made last night’s show unforgettable for me.”

Also speaking after the show, Llangollen International Musical Eisteddfod Music Director, Vicky Yannoula, said: “What a start to our 2018 festival! Alfie’s performance tonight was absolutely flawless. He has an excellent record with audiences at the International Eisteddfod and that was evident tonight.

“Alfie is a true class act and he has certainly set the tone and standard for the week ahead.”