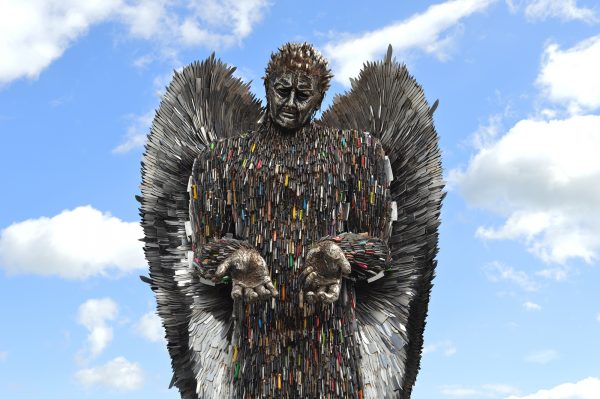 An organisation that is known for its powerful stance against weapons, British Ironworks, is once again sponsoring the Llangollen International Musical Eisteddfod.

After winning the Rotary International Peace Prize hosted at the festival in 2017 and gaining international recognition for its Save a Life, Surrender Your Knife weapons amnesty project, the institution has created a special fixture especially for this year’s celebrations.

The sculpture specialists’ will bring a 15ft tall golden gorilla to International Eisteddfod 2018. The huge ironwork will also be joined by other creations, as well as donations of park benches, tables and chairs for festival-goers. The Llangollen Eisteddfod Amphitheatre stage will also be named after the organisation, in honour of their special presence.

British Ironworks’ Knife Angel project culminated in the creation of the National Monument Against Violence and Aggression – an Angel sculpture crafted from recovered weapons from 43 police constabularies across the country. The simple, yet effective initiative to lessen knife numbers on the streets won the organisation the prestigious Rotary International accolade, providing them with a platform to promote their fantastic works and address the national knife crime epidemic.

Since receiving the International reward, British Ironworks has continued to campaign to assist and support the home office and police to reduce knife crime across the UK, backing all 43 constabularies with knife banks that are provided at a free of charge cost. Originally, the organisation set a goal to collect 100,000 blades from the streets, but having already achieved 200,000, have since increased their ambition to collect one million.

Clive Knowles, Chairman of the British Ironworks Centre, said: “It was an incredible honour to be awarded the Rotary International Peace Award at last year’s International Eisteddfod.

“This year, we are proud once again to return to the festival, bringing with us our golden gorilla sculpture, to stand tall over festival-goers during the celebrations. As we look forward to presenting the International Rotary Peace Prize, we’d like to thank all nominees and are delighted to hand the accolade over to the worthy individual or organisation.”