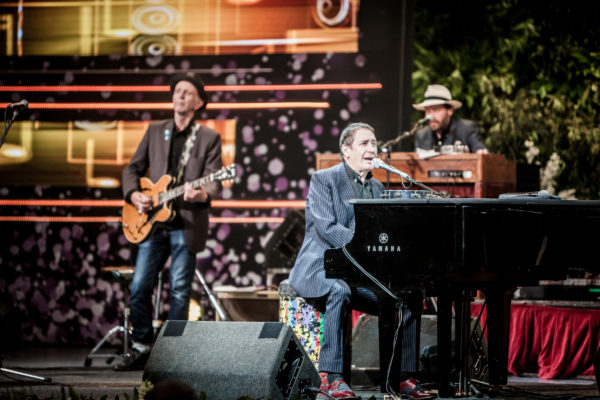 Longstanding friend and performer of the Llangollen International Musical Eisteddfod, Jools Holland wows the crowd with energetic performance on the festival’s opening night.

This annual festival promises another week of quality music from the likes of classical tenor Rolando Villazón, Gipsy Kings, and Indie group The Fratellis and it was fitting that the opening concert should be lead by Eisteddfod Vice President, Jools Holland.

The returning festival favourite and proud supporter of the international festival, Jools Holland burst into the Royal Pavilion in a high-energy performance accompanied by his legendary Rhythm and Blues Orchestra on Monday night.  Jools started the night by saying how proud he was to be a patron of the festival and how singing together on stage with his band to make one sound reflected the ethos of the festival – sharing cultures in one world.

The UK’s most popular pianist launched his much anticipated performance playing mesmerising jazz on the piano before being joined on the piano by his younger brother, Christopher Holland, which immediately got the audience clapping. Holland’s guests included soulful singers Louise Marshall, Mabel Ray, and the dynamic reggae duo who got the whole audience jumping to its feet, Pauline Black and Arthur Gaps. Returning visitor to Llangollen Eisteddfod and renowned R&B soul diva, Ruby Turner, also joined him. She once again captivated the crowd with her powerful vocals, belting out sensational soul numbers.

Renowned for his showmanship, Holland offered an array of outstanding jazz and blues classics, which ended in the show-stopping hit ‘Enjoy  Yourself’.

The success of the Eisteddfod’s first evening performance in the scenic town of Llangollen promises visitors a weeklong celebration of international music. The festival will culminate on Sunday 7th July with the fantastic Llanfest featuring headline performances from The Fratellis and The Coral.