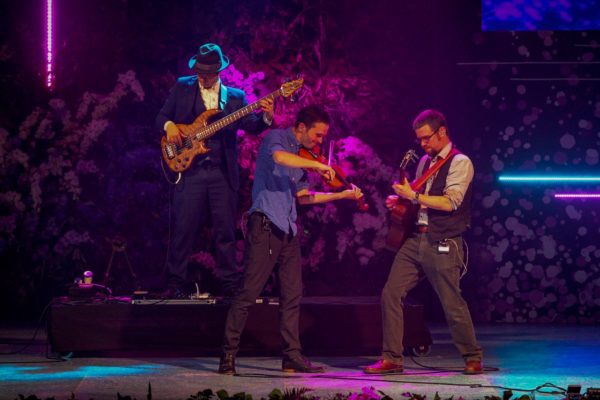 Mabon headlined the festival’s International Celebration evening that showcased a vibrant carnival of cultures. The evening presented the very best of global talent with the memorable Procession of Nations, which saw international performers weaving spectacularly through the audience, waving their national flags as they celebrated the Eisteddfod’s key values of international unity and friendship.

Mabon has a reputation as one of the most celebrated live bands on the traditional music scene, established now as a five-piece group led by Jamie Smith’s vocals and accordion. They dazzled in an outstanding original composition of upbeat folk music, offering the audience a swirling blend of upbeat Celtic jigs and cheerful lyrics.

These well-established festival favourites who have received global recognition for their vibrant performances, showcased their contemporary interpretation of traditional Welsh folk tunes with gusto as the audience enjoyed the fourth night of live performances at the Eisteddfod.

Before their performance, Mabon hosted The Gathering, an impromptu festival dance event. The band’s blend of distinctive Welsh melodies with a contemporary twist got the festival field dancing. The entire festival was alive with participants, performers, competitors, visitors and event organisers joining together in a Twmpath, a gathering of people dancing traditional Welsh dance, similar to a Ceilidh.